Moto X4 was launched with Android Nougat, though it received an Android Oreo update in December last year

While Android Pie is yet to make way to high-end Motorola phones including the Moto Z3 and Moto Z3 Play, some Moto X4 users in India have now reportedly received an Android Pie update in the form of a soak test. The update is said to be over 1.1GB in size. The latest development comes weeks after the company announced that it would start taking registrations for an Android Pie soak test for the Motorola One Power. The new Android version is, however, slated to debut on the Android One handset through a stable channel sometime by the end of the year.

As XDA Developers reports, the Android 9 Pie update is being pushed in India with build number PPW29.69-17. The update is initially rolling out for beta testers through a soak test, though it could reach the masses as well over time. Notably, Motorola has a historical record of bringing new software versions through a soak test model before making them public for all its users. This helps to fix the early bugs and issues. 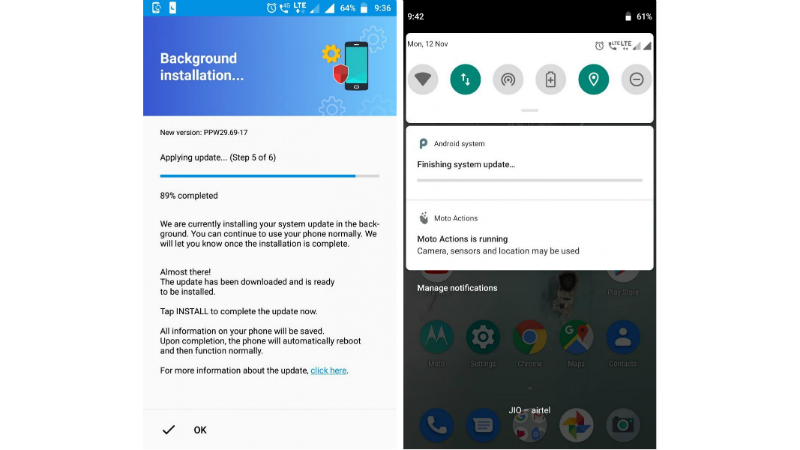 With the arrival of Android Pie, the Moto X4 is expected to receive the new gesture navigation system as well as features such as App Actions, Slices, Adaptive Battery, Adaptive Brightness, App Timers among others. It is also safe to assume that the update will come with the latest Android security patch.

The Moto X4 isn't the only Motorola smartphone that has been getting closer to Android Pie. The company is also bringing the latest software version to the Motorola One Power. It announced the soak test for the Android Pie at the time of the launch of the Motorola One Power last month, and a Geekbench listing recently emerged showing the handset running the new Android version. The update is expected to hit the phone that is a part of Google's Android One programme sometime by the end of the year.

Motorola launched the Moto X4 with a dual rear camera setup in November last year. While the smartphone originally arrived with Android 7.1 Nougat, it received an update to Android 8.0 Oreo in December last year. The company also brought a 6GB RAM variant of the Moto X4 in January.