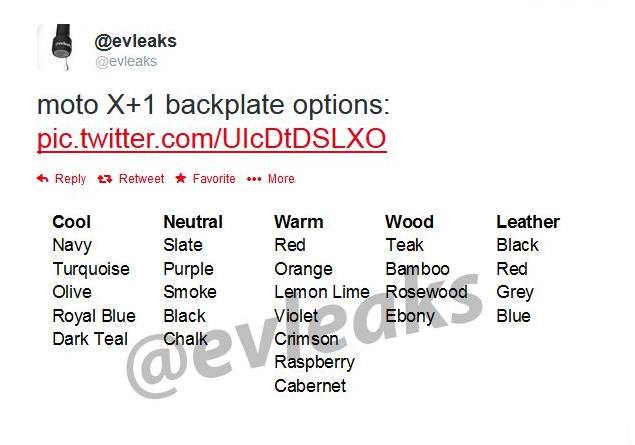 First the name 'Moto X + 1' and now a list of customisation colours of the alleged Moto X successor, it seems that the tipster @evleaks is on a roll when it comes to information about the device. This time around however, the tipster has removed the spaces in the model name, calling it the 'Moto X+1'

Apart from the speculation, there are no other details available. What we have heard so far suggests that the Moto X successor might debut with Motorola's Android Wear project, the Moto 360, in the summer. Earlier @evleaks had suggested that the device is coming soon and would be named "Moto X + 1."

Notably, the successor to the Moto X is not a completely unannounced device, with Motorola suggesting a late summer release for it while answering queries on its official Twitter handle in February.

The Moto X, one of the first true customisable Android smartphones, was launched in August last year and was initially available in the US only. It has been some time now that the company has launched the 16GB variant of Moto X in India at Rs. 23,999, via its online partner Flipkart.

The Moto X features a 4.7-inch display with a resolution of 720x1280 pixels. It is powered by a 1.7GHz dual-core Qualcomm MSM8960Pro Snapdragon processor along with 2GB of RAM. There is 16GB of inbuilt storage, which is non-expandable. It also sports a 10-megapixel rear camera accompanied by an LED flash and a 2-megapixel front-facing camera.
Comments

How to root Nokia X and get access to Play Store and Google Now
Amazing Spider-Man 2 launching April 17 for Android, iOS and Windows Phone