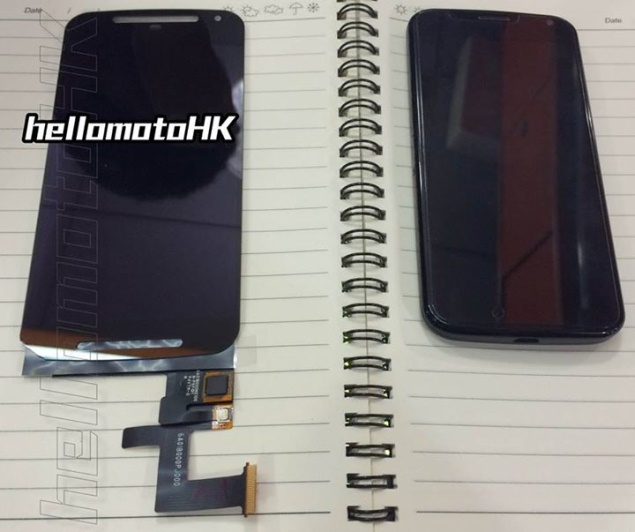 While Motorola has sent out invitations for September 4 event in Chicago, where the company is expected to launch four new products including the successors of the Moto G and Moto X, images of the front panel of rumoured Moto X+1 have been leaked by a Facebook user on Friday, and its specifications are said to have been listed by alleged benchmark results.

The leaked images by HelloMotoHK show the alleged front panel of the much-anticipated successor to the Moto X (Review | Pictures), thought to be called the Moto X+1, in comparison with the original Moto X. As seen in images, the alleged Moto X+1 front panel seems bigger (rumoured to be 5.2-inch) than the Moto X's 4.7-inch display. The post says the Moto X+1 will sport a 5-inch display. Also visible in the images are the dual front speakers, slightly bigger than the Moto E's speakers.

The specifications of the anticipated smartphone were spotted on a GFXBench test result allegedly of the Motorola Moto X+1 (XT1097).

According to the specifications listed on the alleged Moto X+1 (XT1097) GFXBench listing, the smartphone will run Android 4.4.4 KitKat, and sport a 5.2-inch full-HD (1080x1920 pixels) display. The smartphone is also said to feature a 2.4GHz Qualcomm Snapdragon 800 processor alongside the Adreno 330 GPU and 2GB of RAM.

Previously, a device claimed to be of a "near-final prototype" of the anticipated Moto X+1 was leaked by Android Police. It had featured wood-finished back panel, with a camera in the centre above a Motorola logo. The front also had a speaker grill at the bottom of the display, like the Moto E (Review | Pictures).

The alleged Moto X+1 images had also showed metallic side panels on the smartphone, claimed to be made of aluminium by the tipster. The device in the images features a 3.5mm audio jack on top, along with the power and volume controls on the right panel, consistent with Motorola's current series of smartphones, although the SIM card slot was shown shifted to the top, alongside the audio jack.
Comments