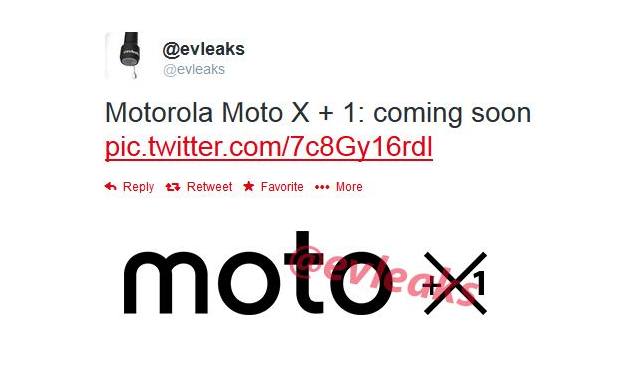 Back in February, Motorola had confirmed that the next version of Moto X is scheduled to launch late in the US summer. While there is quite some time to go for that, the original Moto X is still debuting in some markets, the rumours of the successor have already started to do rounds over the internet.

An image posted by prolific tipster @evleaks on Saturday suggests the name of the Moto X's successor will be "Moto X + 1." The tipster did not reveal anything else, except that the device is coming soon.

As for the name "Moto X + 1", it is possible that the company has codenamed the device with it for now and might change the name later. But the 'coming soon' tag is something that has made the tech fraternity speculate. Previously Motorola, while answering queries on its official Twitter handle, had suggested a late summer time frame for the next version of Moto X.

Q from twitter: When is next version of Moto X? A: Keep posted - hint - late summer. #MotoMWC

Now it is speculated that we might see the alleged "Moto X + 1" with the company's already lined-up release of its first wearable device for the coming US summer. The former Google-owned company has already detailed its plan for the Moto 360 smartwatch under the Android Wear project, a wearable that will be available in a variety of styles globally.

Apart from the speculations there are no other details available for the next version of Moto X as yet.

Notably it hasn't been a month since the Moto X landed in India at Rs. 23,999. Motorola had launched the device with its exclusive online partner Flipkart. Here the smartphone is not customisable like the U.S market and is only available in a 16GB variant.
Comments