Moto G7 Plus is expected to sport a 6.24-inch screen

We are still a few days away from the expected launch date for Motorola's new Moto G7-series, but all four models in the lineup have already been leaked multiple times with pretty much everything laid bare. Now for the overkill, a fresh set of alleged live images of the Moto G7 Plus have appeared online, which offer a great look at the upcoming smartphone. As per a recent leak, claimed to be originating from Motorola's own website, the Moto G7 Plus will come with a 6.24-inch screen with octa-core Qualcomm Snapdragon 636 SoC.

The newly leaked live images of the Moto G7 Plus, which were published by 91Mobiles, are in line with the previous leaks of the smartphone. These renders clearly show the waterdrop display notch as well as the dual-camera setup presence on the back of the phone. Additionally, you can also spot the rear fingerprint sensor and the LED flash for the rear cameras in the images. 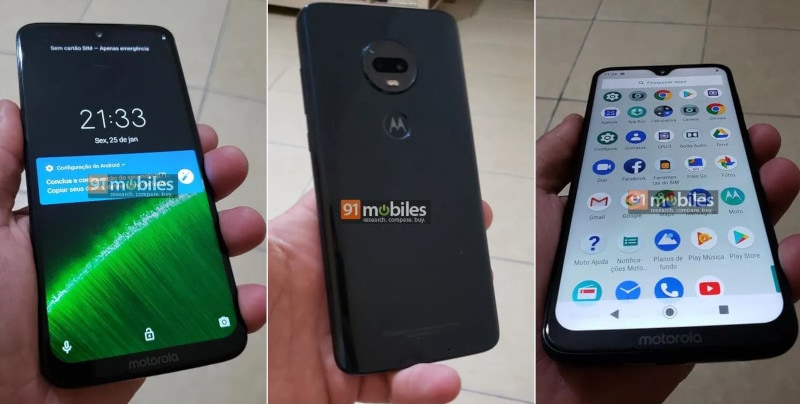 As we have reported earlier, Motorola is hosting a press event on February 7 in Brazil, where it is expected to unveil the Moto G7-series. The lineup is said to include Moto G7, Moto G7 Plus, Moto G7 Play, and Moto G7 Power smartphones. Further, it is believed that the Moto G7-lineup will first go on sale in Brazil, followed by other markets.

The Moto G7 Plus will reportedly sport a 6.24-inch display. It will be powered by octa-core Qualcomm Snapdragon 636 SoC, coupled with 4GB of RAM and 64GB of inbuilt storage in the base model, but the memory and storage details of the other variants are unclear at this point. Among other specifications, the dual-camera setup on the back of the phone will house a 16-megapixel primary sensor with an f/1.7 lens and a 5-megapixel secondary sensor with an f/2.2 lens. The front shooter will include 12-megapixel sensor and an f/2.0 lens. The Moto G7 Plus will also pack a 3,000mAh battery.

Further reading: Moto G7 Plus, Motorola Moto G7 Plus, Moto G7 Plus specifications
Gaurav Shukla Email Gaurav Part of Gadgets 360 news team, Gaurav handles a multitude of responsibilities from covering the latest happenings in the world of science and technology to editing and assigning news stories. In another life, he used to be a technology blogger, writing about Android and its massive ecosystem. Paranoid about online surveillance, Gaurav believes an artificial general intelligence is one day going to take over the world, or maybe not. He is a big Person of Interest fan though. More
Samsung 1TB eUFS 2.1 Storage Chips Announced for Upcoming Flagship Smartphones, May Feature on Galaxy S10
Sony, Nintendo Seen Scoring Strong Q3 Earnings as Console Battle Reaches Next Level

Moto G7 Plus Spotted in Fresh Leaked Images Ahead of February 7 Launch
Comment
Read in: हिंदी