Moto G6 and Moto G6 Play have been launched in India, at an event in New Delhi on Monday. To recall, the smartphones were first launched globally in April, alongside a third variant - the Moto G6 Plus - which has not yet been brought to India. Both the Moto G6 and Moto G6 Play feature 18:9 displays, with the Lenovo-owned company catching up on the trend of taller-than-usual displays that provide a more immersive experience and more visual real estate to users. Moto is calling these Max Vision displays, and is using IPS panels. As we learnt ahead of the launch, the Moto G6 and Moto G6 Play are exclusive to Amazon India and Flipkart respectively. At the launch event, Motorola announced that the latest Google Lens integration is coming to the native camera app, with landmark recognition and smart text selection.

The Moto G6 price in India starts at Rs. 13,999 for the 3GB RAM/ 32GB storage variant, going up to Rs. 15,999 for the 4GB RAM/ 64GB storage variant. At this price point, the smartphone competes with the Xiaomi Redmi Note 5 Pro and the Asus ZenFone Max Pro M1. It will be available in an Indigo Black colour option. It is exclusive to Amazon India online, but will be available via Moto Hub stores. It will go on sale from Monday midnight itself. Moto G6 launch offers in India include a flat Rs. 1,250 discount on HDFC credit and debit cards as well as EMI transactions. There are also no-cost EMI up to 9 months, up to Rs. 1,000 extra off on exchange, up to 80 percent off on Kindle ebooks (up to Rs. 300), and the inclusion of 1-year of Amazon Prime subscription on Airtel postpaid plans worth Rs. 499 and above. Those that shop using the Paytm Mall QR code at Moto Hubs will get Rs. 1,200 cashback on mobile recharges on Paytm.

On the other hand, the Moto G6 Play price in India has been set at Rs. 11,999, and is available in only one variant - 3GB RAM/ 32GB storage. At this price point, the smartphone competes with the Redmi Note 5 in India. The smartphone will be available in Fine Gold and Indigo Black colour variants. It is exclusive to Flipkart onilne, but will also be available via Moto Hub stores. It will also go on sale via Moto Hubs. Moto G6 Play launch offers in India include Rs. 1,000 flat discount on purchases made with ICICI credit and debit cards (only on Flipkart), no-cost EMI with Bajaj Finserv, extra Rs. 1,500 on exchange, and an effective 25 percent discount on the Jio Rs. 198 plan. There is also an assured buyback offer of Rs. 5,100 on Flipkart. Those that purchase the smartphone using the Paytm Mall QR code at Moto Hub stores will get a Rs. 1,200 cashback on mobile recharges on Paytm. 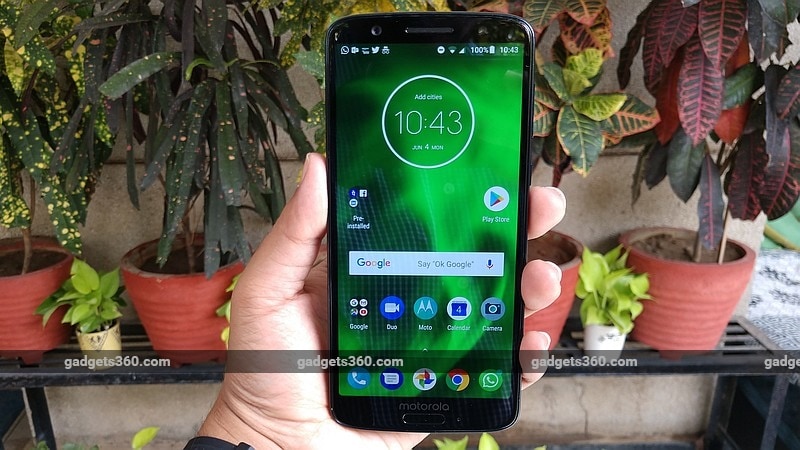 The Moto G6 bears a dual rear camera setup, with a 12-megapixel primary sensor and a 5-megapixel secondary sensor, featuring an f/1.8 aperture. The company is touting the slow motion video recording as one of the features, apart from a Bokeh depth-of-field Portrait Mode, a Text Scanner mode that converts an image to text, and a Spot Color mode that lets users retain colour on only one object in the image, while turning the rest of the photo monochrome. On the front, the Moto G6 bears a 16-megapixel sensor, and offers a beautification mode as well as a group selfie mode. Both front and rear cameras also feature the company's Face Filters feature.

As we mentioned, the Moto G6 in India will be available in two storage variants - 32GB and 64GB - both of which are expandable via microSD card (up to 128GB) featuring its own dedicated slot. Connectivity options on the Moto G6 include 4G VoLTE, Wi-Fi 802.11 b/g/n (dual-band, 2.4GHz and 5GHz), Bluetooth v4.2, GPS/ A-GPS, USB Type-C, and a 3.5mm headphone jack. Sensors on board include an accelerometer, ambient light sensor, gyroscope, magnetometer, and a proximity sensor. It bears a fingerprint sensor on the home button below the display. It measures 154.5x72.4x8.3mm, weighs 167 grams, and is powered by a 3000mAh battery that's coupled with a TurboPower charger in-the-box. The company is also touting support for Dolby Audio on the smartphone's speaker, apart from nano-coating technology that protects the smartphone from scratches. 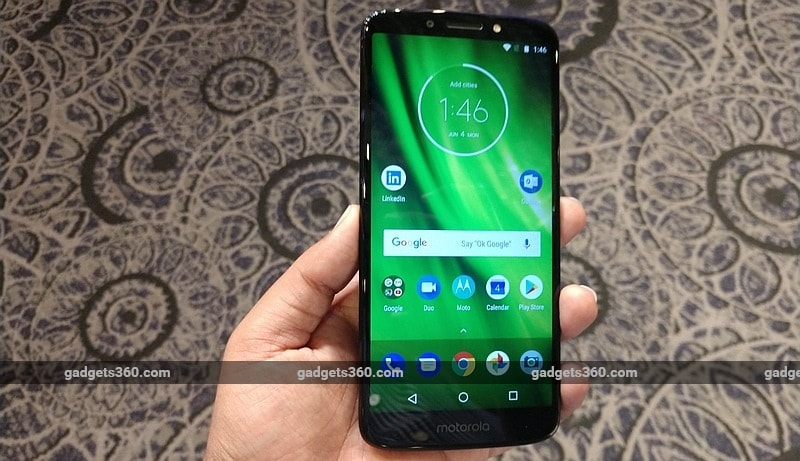 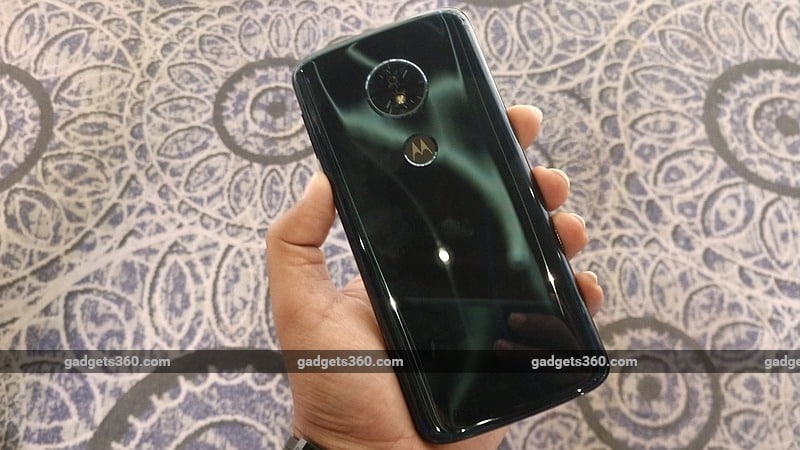 Connectivity options on the Moto G6 Play include 4G VoLTE, Wi-Fi 802.11 b/g/n, Bluetooth v4.2, GPS/ A-GPS, and a 3.5mm headphone jack. Sensors on board include accelerometer, ambient light sensor, gyroscope, and a proximity sensor. It is powered by a 4000mAh battery coupled with a TurboPower charger. It measures 154.4x72.2x8.95mm and weighs in a 173 grams.