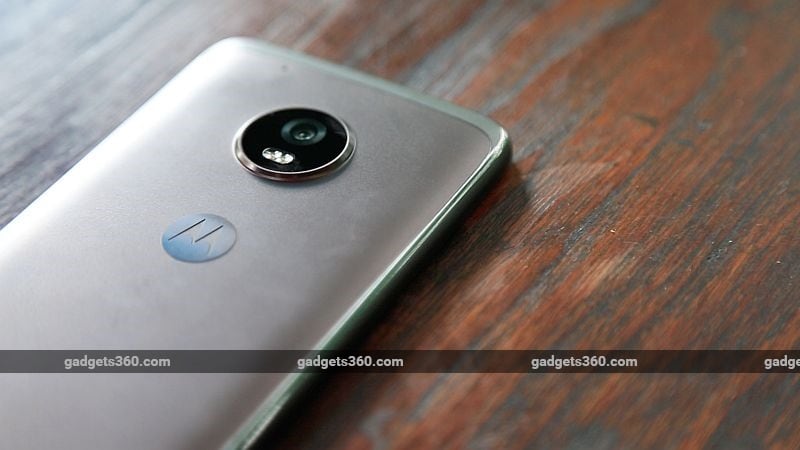 Moto G5 Plus has been launched in India, and will be available exclusively via Flipkart from Wednesday itself, starting 11:59pm IST. The smartphone will come in two colour options - Lunar Grey and Fine Gold, and will come with several launch offers. Moto G5 Plus will compete against the popular Xiaomi Redmi Note 4 in the Indian market, as well as its own sibling Moto M.

Moto G5 Plus price in India

The Moto G5 Plus (Review) launch offers include an additional Rs.1,500 discount on exchange; additional 10 percent discount on SBI cards; no-cost EMIs starting at Rs. 1,889 a month, and the Moto Pulse 2 headset - which costs Rs. 1,299 - can be purchased at discounted price of Rs. 599. Flipkart has also announced a BuyBack Guarantee for the smartphone, where users will be assured of a fixed exchange discount of Rs. 7,000 for their Moto G5 Plus for up to 8 months after purchase. Update 23 March: Flipkart later clarified that the Rs. 7,000 exchange discount was valid only for customers who bought the Moto G5 Plus on launch day. Everyone else - who purchased the smartphone before March 31 - will get Rs. 6,000 exchange discount, which can be availed between six and eight months from the date of purchase.

Moto G5 Plus software and features

The smartphone, alongside the Moto G5, is the first Moto G series smartphone to feature an all-metal design - it's built using diamond-cut high-grade aluminium 6000. This is the biggest highlight of the Moto G5 Plus, apart from what the company is touting as a best-in-class rear camera. The dual-SIM smartphone runs Android 7.0 Nougat out-of-the-box, and has a separate microSD card slot - letting users insert two SIM cards and one microSD card simultaneously. It sports a fingerprint sensor on the home button.

Flipkart Unveils a 'BuyBack Guarantee' for the Moto G5 Plus

Another highlighted feature is One Button Nav. This navigation method is powered by the capacitive home button, which allows users to swipe to browse through the phone's interface - the feature is being touted to aid one-handed operation of the Moto G5 Plus. Like previous Moto phones, the Moto G5 Plus also comes with Moto Actions - which allow users to utilise gestures and other stimulus to activate functions like the camera or flashlight.

Now, let us get to the Moto G5 Plus specifications. The smartphone sports a 5.2-inch full-HD (1080x1920 pixels) IPS LCD display with Corning Gorilla Glass 3 protection. It is powered by a 2GHz Snapdragon 625 octa-core SoC, and in India this is coupled with either 3GB or 4GB of RAM.

The Moto G5 Plus camera setup includes a 12-megapixel rear camera, complete with dual autofocus pixels, 4K video recording, an f/1.7 aperture, and dual-LED flash. On the front, it sports a 5-megapixel camera with an f/2.2 aperture and a wide-angle lens. Onboard storage, either 16GB or 32GB, is expandable via microSD card (up to 128GB).

Moto G5 Plus connectivity options include 4G LTE, Wi-Fi 802.11 a/b/g/n, GPS/ A-GPS, NFC, Bluetooth v4.2, 3.5mm audio jack, and Micro-USB. The Moto G5 Plus battery capacity is 3000mAh. It is non-removable, and the company is touting TurboPower charging will provide six hours of battery life in just 15 minutes of charging. Sensors on board include accelerometer, ambient light sensor, and gyroscope. It weighs 155 grams and measures 150.2x74x9.7mm.