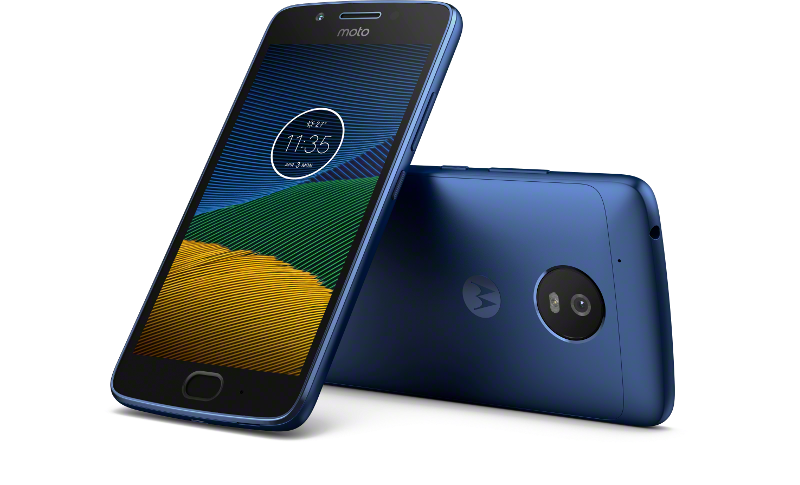 Motorola unveiled the Moto G5 and Moto G5 plus last month at MWC 2017. The devices were initially launched in Lunar Grey and Fine Gold colour variants. The company at the launch also mentioned a Sapphire Blue colour option that would be exclusive to three carrier subscribers. We now have a have a good look how the Moto G5 will look in blue through some leaked press renders.

The renders were leaked via a tweet by tipster Roland Quandt. The images show the back and sides of the Moto G5 covered in blue while the front stays black. There is no mention as of now on when the Blue Sapphire variant will be available and whether the new option is limited in number. We expect the colour to also be available for the Moto G5 Plus.

The Moto G5 Plus was launched in India last week starting at Rs. 14,999, while the Moto G5 is yet to be announced in the country. The former has already managed to become the fastest selling smartphone on Flipkart for its price segment.

The Moto G5 features a 5-inch full-HD (1080x1920 pixels) display and is powered by a 1.4GHz Snapdragon 430 processor. The smartphone is offered in 2GB or 3GB of RAM and 16GB or 32GB of internal storage, with the option to expand via a a microSD card slot (up to 128GB). The handset is fitted with a 2800mAh removable battery with support for fast charging.

For optics, the Moto G5 sports a 13-megapixel rear camera with PDAF, f/2.0 aperture, and dual-LED flash, and a 5-megapixel wide-angle front camera for selfies. Both the Moto G5 and G5 Plus run Android 7.0 Nougat out of the box and come with Motorola exclusive features such as Moto Display, Actions, twist gesture, and a One Button Nav mode.

Microsoft Appeal Against Xbox 360 Class Action Lawsuit Gets US Supreme Court Support
200 Million 4G Feature Phones Will Be Sold in India in Next 5 Years: Counterpoint