Share on Facebook Tweet Snapchat Share Reddit Email Comment
Motorola is widely expected to launch the third-generation of the Moto G smartphone - expected to be called the Moto G (Gen 3) - at an event next week. The price and specifications of the yet-to-be-announced Motorola handset however may have been leaked by an online retail partner already.

Spanish online retailer, fnac.es, has listed the Motorola Moto G (Gen 3) with a price tag of EUR 199 (approximately Rs. 13,700) alongside complete specifications, potentially spilling the beans ahead of the official unveiling. The retailer lists the 4G variant of the Moto G (Gen 3) at the said price. Of course since this is a third-party retailer, one cannot be certain if this will be the official launch price and specifications whenever Motorola launches the Moto G (Gen 3).

The online listing includes an image of the unannounced Moto G (Gen 3), which coincidentally is identical to the images that have been leaked in recent past. 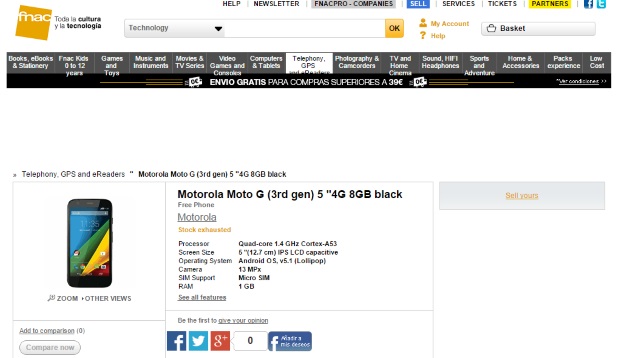 We remind readers however that nothing is official yet.

Motorola last week started sending invites for an event on July 28 seemingly confirming recent reports that tipped the company would launch its new Moto G (Gen 3) and Moto X (Gen 3) smartphones on that date. The Lenovo-owned company sent out invites for an event in New Delhi, as well as events in London, New York, and Sao Paulo.