Share on Facebook Tweet Snapchat Share Reddit Email Comment
Motorola has launched the second generation of its popular Moto G and Moto X devices on Friday, called the Moto G (Gen 2) and Moto X (Gen 2). The Moto G (Gen 2) will be available from Friday (at midnight) via Flipkart, priced at Rs. 12,999 for the 16GB version.

Much to the surprise of fans across the globe, the company has launched the smartphones first at its event in India, despite confusing reports of a launch event on Thursday in Chicago. With the popularity of the Moto G and Moto E in India however, the country's importance to Motorola cannot be underestimated.

Both phones are powered by Android 4.4.4 KitKat, and the company has confirmed it will roll out an Android L update for the two devices - however, there was no mention made of such an update for the previous generation.

Motorola did mention that the previous generation Moto G, Moto X, and Moto E will remain available on Flipkart, but will be phased out with time.

The Moto G (Gen 2) will be available in 8GB and 16GB variants. The biggest addition to the smartphone compared to the first-generation Moto G is the inclusion of a microSD card slot. The company hasn't yet specified the maximum supported card capacity however.

The second-generation Moto G features an 8-megapixel autofocus rear camera, and a 2-megapixel front-facing camera. Notably, the smartphone - like the Moto E - features dual front speakers, above and below the display, apart from 2 mics.

Notably, Michael Adnani, Vice President - Retail & Head Strategic Brand Alliances, Flipkart, informed us at the event that Motorola had enjoyed astonishing sales via the e-commerce site in India, selling over 1.6 million units of its Moto devices (Moto E, Moto G and Moto X) in the past 7 months. 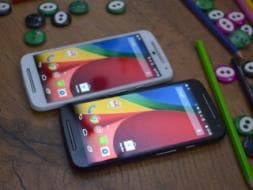