The biggest change in the software update is the Google Now Launcher, which replaces the default launcher. The update also brings some bug fixes. 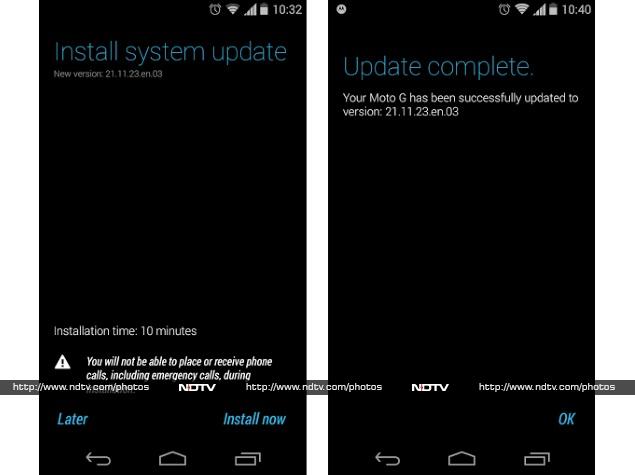 Motorola confirmed the news via its support page and said, "We are excited to announce a new software update for Moto G (2nd Generation) by Motorola. This update brings the Google Now Launcher as well as a few bug fixes for your new Moto G."

The update is about 120MB in size and can be checked manually via Settings > About Phone > Software Update.

Motorola notes, "You cannot downgrade to a previous software version after installing this update."

Motorola's second-generation Moto G went on sale in India earlier this month priced at Rs. 12,999 for the 16GB variant.

It features a 5-inch HD (720x1280 pixel) display, and is powered by a 1.2GHz quad-core Snapdragon 400 (MSM8226) processor, coupled with 1GB of RAM and the Adreno 305 GPU. The Moto G (Gen 2) comes with microSD support, addressing what many believed was its predecessor's biggest shortcoming. It sports features an 8-megapixel autofocus rear camera, and a 2-megapixel front-facing camera.