Motorola seems to be in no mood to rest after the success of the Moto G in India, as the company has now introduced a CDMA variant of the budget smartphone through telecom operator Reliance Communications.

The Moto G (CDMA) variant is now available at Reliance Communications' official online store for Rs. 13,490 (upfront) for 8GB variant. As of now, there is no word on the 16GB version of the smartphone. It's worth pointing out that the Moto G 8GB model is officially retailing at Rs. 12,499. 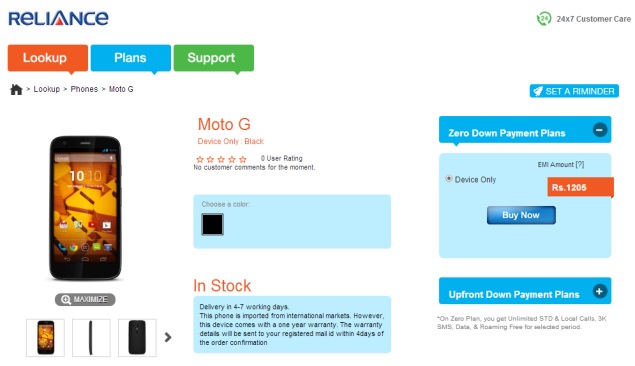 Earlier Flipkart, the exclusive online partner of Motorola, introduced new 'exchange your old phone' offer under which customers can get a Rs. 2,000 discount on the purchase of the Moto G smartphone in exchange of select old phones. With the exchange offer, the Rs. 12,499 (8GB) and Rs. 13,999 (16GB) price tags on the Moto G get reduced to Rs. 10,499 and Rs. 11,999 respectively.

The Moto G (CDMA) comes with identical specifications to the Moto G, except that it supports the CDMA network.

For those unaware, the Moto G runs Android 4.4.2 out-of-the-box. It features a 4.5-inch HD 'edge-to-edge' display with a resolution of 720x1280 pixels (translating to a pixel density of 329ppi) and boasts of a Corning Gorilla Glass 3 screen. Powered by a quad-core 1.2GHz Qualcomm Snapdragon 400 processor coupled with an Adreno 305 GPU, the Moto G features 1GB of RAM. On the optics front, the Moto G sports a 5-megapixel rear camera along with an LED flash and also includes a 1.3-megapixel front-facing camera. The rear camera supports HD (720p) video recording.

The Motorola Moto G also features water-resistant nano-coating on the inside and outside. The Moto G packs a 2070mAh battery, which Motorola claims can deliver up to 30 percent more talktime than the Apple iPhone 5s. Notably, there is no microSD card slot for expandable storage.