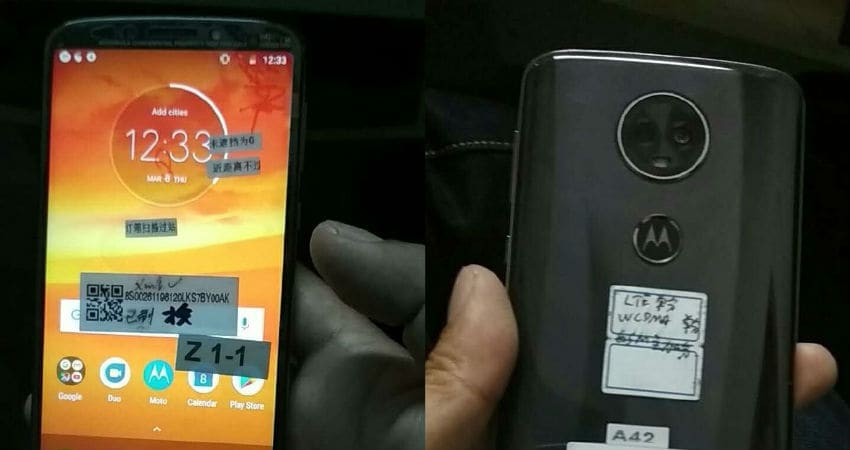 Motorola is expected to launch a trio of budget smartphones — Moto E5, Moto E5 Play, and Moto E5 Plus — in the market soon. The Lenovo-owned mobile maker had unveiled the Moto E4 series in July 2017, and is expected to release the next E-series handsets around the same time this year. There have been a few leaks around the Moto E5 phones floating on the Internet, and the new Moto E5 Plus leak reiterate the same key design elements.

In a post on Weibo, a tipster has leaked images of the alleged Moto E5 Plus revealing a few design details of the smartphone. The live images of the Moto E5 Plus show the handset's front and rear end, and the first thing to notice is the display with 18:9 aspect ratio and slim bezels. Meanwhile, the image of the rear panel reveals a glossy, curved glass back with a fingerprint sensor embedded in the company's logo. As per the images, the rear panel of the Moto E5 Plus will be home to a circular camera module that makes the smartphone appear more like the Moto X4 rather than the Moto E4 Plus.

Last month, tipster Evan Blass had leaked a render of the Moto E5 Plus, showing off its design. Interestingly, while the smartphone seemed to sport dual rear camera setup based on the leaked images, Blass had claimed that there will be a single camera at the back, and the second cutout was for the laser autofocus system. As per the leaked image, the Moto E5 Plus appeared to have a display with 18:9 aspect ratio, and expected to come with rounded corners and relatively thin bezels. Notably, the smartphone seen in the new leaked live images sports the same design as we saw back then.

When it comes to other specifications, a previous report had claimed that the Moto E5 Plus will come in two variants, with Snapdragon 430 and MediaTek MT675X SoC options. Also, the Moto E5 Plus is expected to come with a 5.8-inch HD+ (720x1440 pixels) display, 3GB RAM, 64GB internal storage, and a dual rear camera setup with a 16-megapixel primary sensor along with f/1.75 aperture, and an 8-megapixel secondary sensor with f/2.0 aperture.

As of now, there is no information on when the Moto E5 Plus would be released, or what its pricing would be. When it comes to the Moto E4 Plus, its biggest USP was a 5000mAh non-removable battery along with fast charging support. The smartphone when launched in India, was priced at Rs. 9,999.

Xiaomi MIUI 9.5 Officially Announced and It’s Coming to These 30 Smartphones