Moto E Stocks Will Be Replenished With 20,000 Units on Friday: Flipkart

Ever since Moto E debuted in India via Flipkart, there have been multiple instances that the handset has gone 'out of stock' and came back 'in-stock'. If you looking to buy a Moto E smartphone, but were let down with the "out of stock" listing on Flipkart, you might just be in back in luck.

Flipkart has announced that the budget Moto E will be again available on the e-commerce website starting from 11am on Friday. However, the top online retailer of the country has clearly claimed that it has a limited stock of 20,000 Moto E units.

Flipkart confirmed the news on Twitter and said, "Looking to buy the #MotoE? Tomorrow - 11am sharp, the Moto E will be back! Don't miss out!"

Looking to buy the #MotoE? Tomorrow - 11AM sharp, the Moto E will be back! Don't miss out! http://t.co/PyDhj4WZM9 pic.twitter.com/XFS51w39jJ

For those unaware, Flipkart, the exclusive online partner of Motorola handsets in India, has been listing the Moto E as "out of stock" with the handset's listing page offering 'Notify Me' message for interested consumers within 48 hours of the phone's launch.

In another tweet, Motorola on Tuesday had hinted about the new stocks of Moto E arriving soon. It said," We are working towards restocking the #MotoE. Tentatively, it should be back on @Flipkart by early next week. Thanks for your patience!" 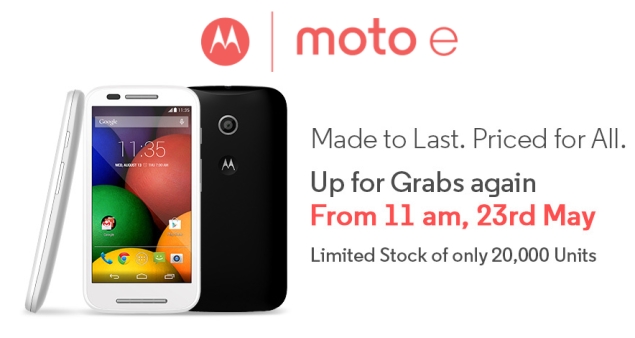 Earlier on Thursday, Moto E's colourful back covers went on sale via Flipkart at Rs. 899. The back covers for the Moto E have been available in nine colours - Chaulk, Cherry, Lemon Lime, Licorice, Raspberry, Royal Blue, Spearmint, Turquoise, and Violet.

The Moto E has already created a buzz in the Indian market with its impressive pricing, and it is one of the first smartphones in the sub-Rs. 10,000 category to run Android 4.4 KitKat out-of-the-box.

However, to challenge Motorola's dominance in sub-Rs. 10,000 segment, Micromax has now launched its first Android KitKat smartphone, the Unite 2 at the same price as the Moto E - Rs. 6,999.