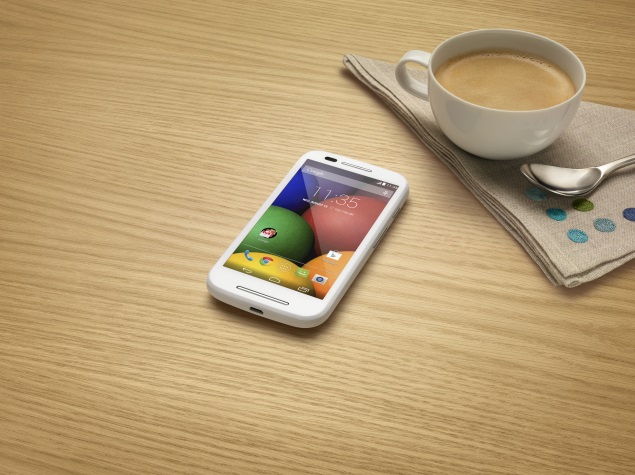 Moto E launched amidst much fanfare on Tuesday and created a buzz in the Indian market with its affordable pricing.

Now, Flipkart, the exclusive online retailer of Motorola handsets in India, has introduced launch day offers on Moto E, similar to what it did with the Moto G and Moto X. Consumers willing to buy the Moto E on Wednesday can get a 50 percent discount on the purchase of phone covers and 8GB Transcend microSD card. Flipkart is also offering free ebooks worth Rs 1,000 on the opening day.

Motorolalaunched its dual-SIM budget smartphone Moto E in India carrying a price tag of Rs. 6,999. The company announced  that India is amongst the first set of markets that will be getting the smartphone. 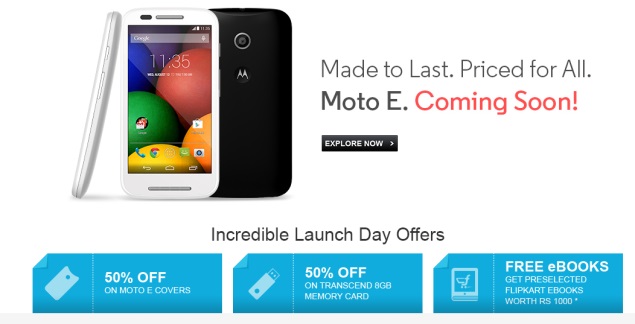 Moto E comes with 4.3-inch display with a qHD (540x960 pixel) resolution, and 256ppi pixel density. Motorola is also touting the Corning Gorilla Glass 3 screen of the phone, along with its 'water-nano coating' which provides a measure of water resistance.

Moto E is powered by a 1.2GHz dual-core Qualcomm Snapdragon 200 processor along with Adreno 302 GPU alongside 1GB of RAM. The Moto E is a dual-SIM phone that supports Micro-SIM cards and an 'intelligent calling feature.' It runs on Android 4.4 KitKat.

In addition, Motorola at its London event of the Moto E revealed the 4G LTE-capable version of the Moto G.

Notably, the Moto G 4G features a microSD card slot, with support for cards up to 32GB. This essentially removes the biggest qualm users had with purchasing the device - a wise decision that Google may want to emulate with the next Nexus smartphone, whenever it's launched.