Xiaomi is also working on a minimalist version of its native Web browser. 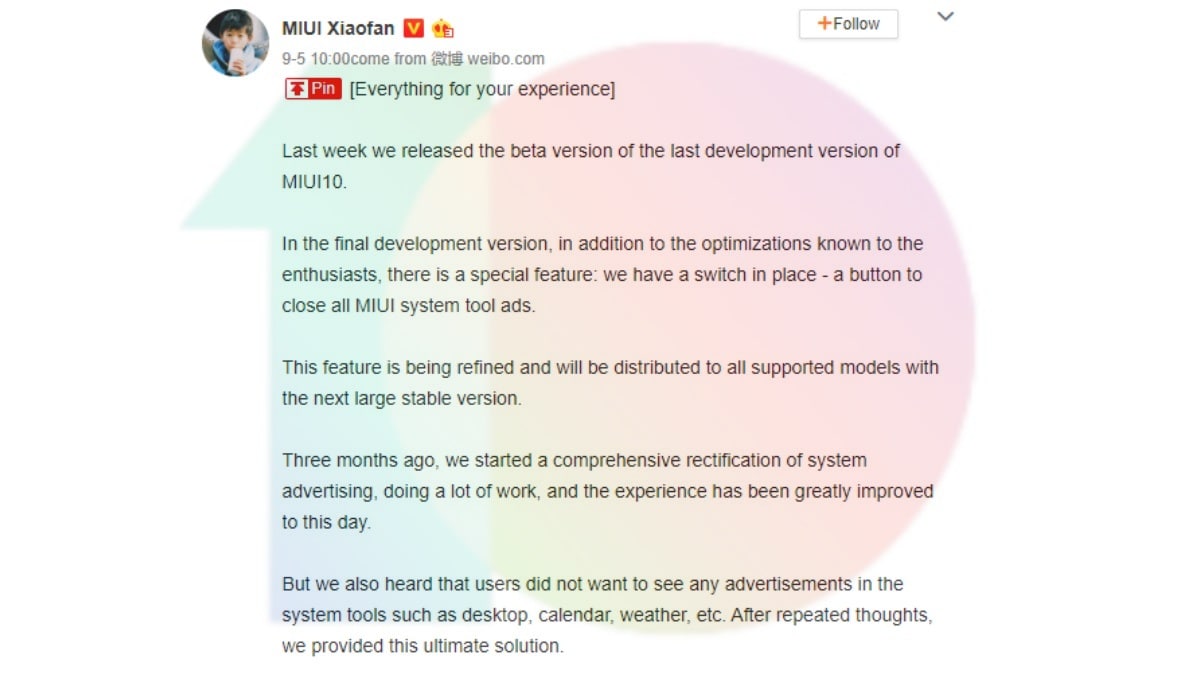 Xiaomi has courted a lot of flak for ads in MIUI, and it has also been a repetitive trend that we have come across while testing the company's phones. Xiaomi has paid heed to the outrage and is set to do something about it, with several measures announced in the past for upcoming versions of MIUI. Now, we're learning more about the steps being taken. Xiaomi has begun testing a new “Ad Switch” feature that will let users opt out of seeing all system ads with a single toggle. The feature is currently in the development stage and will soon be rolled out via a stable update.

CEO Lei Jun recently revealed that MIUI 11 will cut down on ads and remove the vulgar ads too. Now, Xiaomi's MIUI Experience Chief has revealed in a Weibo post that the company has already begun testing a feature that will let users opt out of seeing ads in MIUI. The feature has been implemented in the form of a switch that can be used to enable or disable ads. However, the mention of ‘compatible phones' suggests that the feature might be limited to certain phones.

The post further adds that Xiaomi began testing a new ad system in MIUI after receiving a lot of negative feedback from users. “[Xiaomi] can confirm that [the ad switch] is being tested. MIUI in China will be rolling out an update with an option to switch off display ads with MIUI [10] 9.8.29. This will affect system apps (such as Calendar, installer, Download manager, etc.). As for a rollout timeline, I'm afraid there isn't any that I can share at this point”, a Xiaomi representative was quoted as saying by Android Authority.

MIUI's ad switch feature is currently being tested in China, but there is no word if, or when, will it make to other markets. As for the switch, it will reportedly be accessible from this path in MIUI: Settings > Privacy Agreement, etc > System tool Advertising. Moreover, it is currently available only in the development version of MIUI 10.9.8.29 or a later build.

Xiaomi has also begun testing a lighter version of its in-house Web browser that will offer a simple interface and won't overwhelm users with a flood of information. It will be interesting to see how Xiaomi copes with users opting out of seeing ads en masse, keeping in mind Xiaomi India MD, Manu Kumar Jain's proclamation in an interview with Gadgets 360 that ads are an integral part of the company's revenue stream.