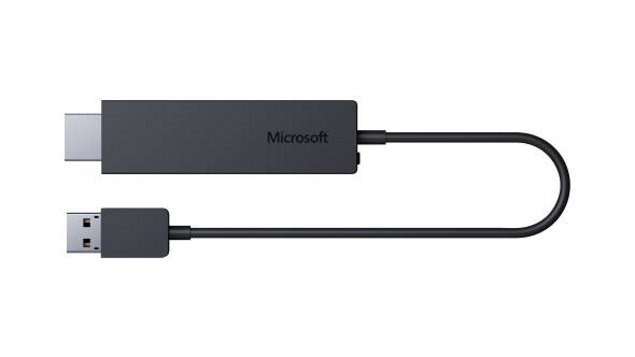 Microsoft on Tuesday put its spin on Google's Chromecast with a device that lets people mirror what's on Windows-powered tablets or smartphones on their television screens.

The US technology giant unveiled Microsoft Wireless Display Adapter, a thumb-drive-size gizmo that plugs into HDMI and USB ports in televisions, and then wirelessly connects with tablets, computer or smartphones running Miracast software.

"With the Wireless Display Adapter, I don't have to worry about getting everyone to huddle around a device," Brandon LeBlanc of Microsoft said in a blog post.

"All the content I care about, along with audio, is easily shared on the big screen."

The adapters were available at Microsoft's online shop for order in the US and Canada at a price of $60, with release set for October.

Google launched a Chromecast "dongle" in July of last year with a price of $35.

Chromecast plugs into television sets and allows people to essentially use smartphones or tablets to orchestrate content streamed directly from the Internet "cloud."

In contrast, the Microsoft adapter is depicted as beaming onto television what is in browsing software on mobile devices.

Xiaomi Being Probed by Taiwan Over Cyber-Security Concerns
Google to Face Charges if It Fails to Improve Settlement: EU