Several leaks and rumours have indicated Microsoft will launch two high-end smartphones this year, namely the Lumia 950 (codenamed Talkman) and Lumia 950 XL (codenamed Cityman). A new report tips that the smartphones will launch at IFA in September, go on sale in October or November, and sport biometric authentication in the form of an infrared iris scanner. The specifications of the handsets have also been tipped.

Notably, the anticipated Talkman and Cityman smartphones were previously tipped to be called the Lumia 940 and Lumia 940 XL, however, the most recent report indicates Microsoft is planning to skip the x40 naming convention and move to x50, but still deciding which model name to go with.

The feature to log in with facial recognition via the iris scanner is said to be a part of Windows Hello feature in Windows 10. Besides the iris scanning technology, the Redmond-based tech giant is also tipped to bring its Surface Pen technology to the Lumia 950 XL. 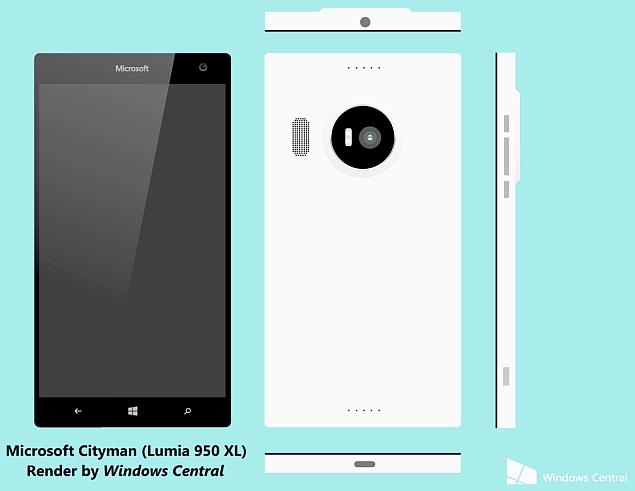 According to Windows Central, the larger-sized Lumia 950 XL would additionally support a new smart cover with circular cut out, letting users easily access notifications. The website has also shown the purported rendered images (seen above) of Lumia 950 XL. While the actual device seems far from being launched, The Verge claims to have independently confirmed the render images of the handset to be almost accurate and close to what the device looks like. It has been further added that US carrier Verizon would not be selling the Lumia 950 or Lumia 950 XL.

The Microsoft Lumia 950 XL would feature the same set of specifications except a 5.7-inch screen size with the same resolution; a 64-bit octa-core Snapdragon 810 SoC, a triple-LED flash for rear camera; a 3300mAh removable battery; a 1-mm silver ring inside the circumference of the black camera pod, and aluminium side buttons. Both handsets would be available in Matte White or Black Polycarbonate body.

While the launch date of the devices are not yet known, Microsoft last week confirmed that the company will announce "premium Lumias designed for Windows 10" soon. Additionally, the Redmond giant has confirmed that it will be announcing several devices at this year's IFA.