Microsoft has sent out invites for a media event on October 6. At the event, which centres on "Windows 10 devices," the company is expected to refresh its Surface lineup and its fitness tracker Band alongside launching the long-rumoured Cityman (Lumia 950) and Talkman (Lumia 950 XL) Windows 10 Mobile-powered handsets.

"We have some exciting news to share about Windows 10 devices," reads the invite. At the event, the company is expected to launch the Surface Pro 4, the successor to the company's Surface Pro 3. Not much is known about the device, save for the fact that it would have the same form-factor as its predecessor, and a similar charging mechanism, as previously noted by the company. This suggests that the Surface Pro 4 won't have any major improvements. 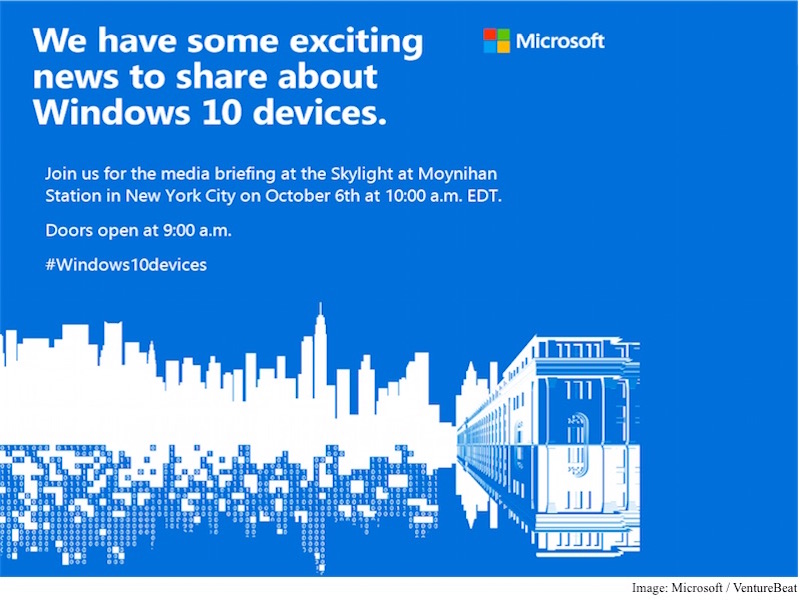 Which brings us to the Cityman and the Talkman. Multiple reports suggest that the Lumia 950 will sport a 5.2-inch WQHD (1440x2560) display and it will be powered by Snapdragon 808 processor coupled with 3GB of RAM and a 3,000mAH battery. The Lumia 950 XL, on the other hand, is said to equip a 5.7-inch QHD display, and is powered by a Snapdragon 810 chipset coupled with 3GB of RAM. On the photography front, both the handsets are said to come with a 21-megapixel rear camera and a 5-megapixel selfie sensor. Both the handsets are said to run Windows 10 Mobile.

Which leaves us with the anticipated Microsoft Band 2. At this point not much is known about the device. We will know more on October 6 at the Skylight at Moynihan Station in New York City.