Amidst recent revelations about Windows 10 for Mobiles Preview and Cortana reaching Android, a new Microsoft Lumia handset has been spotted on a benchmark site alongside specifications. Bearing model name RM-1100, the smartphone is being speculated to be the Lumia 940 XL flagship Windows 10 device that was previously rumoured to launch later this year.

The unannounced Microsoft Lumia 940 XL is seen to sport some pretty top-end specifications on the GFXBench benchmark site, first spotted by German website Winfuture. The specifications include a 5.7-inch QHD (1440x2550 pixels) resolution display with a calculated pixel density of 515ppi.

The screen size is in line with the 'Cityman' smartphone that was tipped back in May, alongside the 'Talkman' with a 5.2-inch QHD display. The smaller smartphone is expected to be launched as the Lumia 940.

Other specifications of the Microsoft Lumia 940 XL tipped by the GFXBench listing include an octa-core Snapdragon processor, which is expected to be the Snapdragon 810 due to the presence of the Adreno 430 on the list, which is only present on the flagship SoC for now. Also shown is 2GB of RAM (1.5GB usable) and 16GB of inbuilt storage (14GB usable). 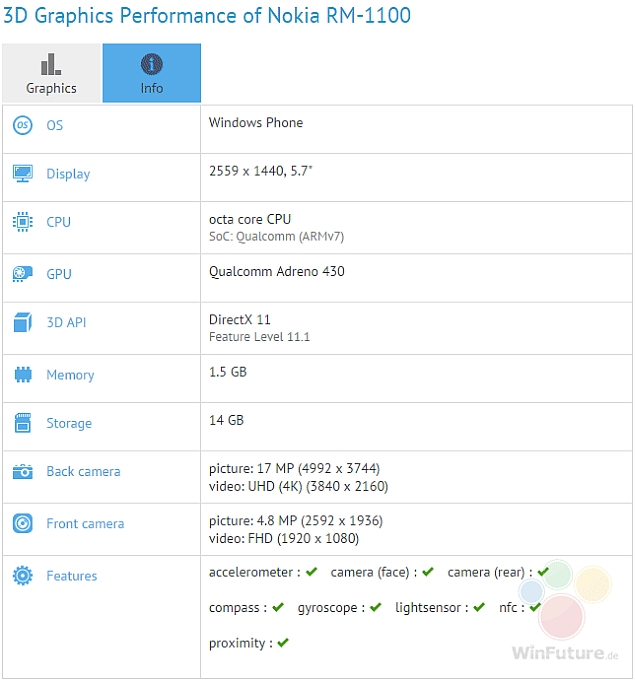 The Microsoft Lumia 940 XL is also seen to include a 17-megapixel rear camera, which can also record 4K resolution videos, and a 4.8-megapixel front-facing camera which can record full-HD resolution videos. Sensors including accelerometer, compass, gyroscope, light, and proximity are also listed, apart from NFC connectivity.

Last month, the unannounced Lumia 840 was also spotted online in its single-SIM and dual-SIM variants on an import-export site with some specification details. The smartphone is also listed to feature a 5.7-inch display and was then speculated to be the Cityman.