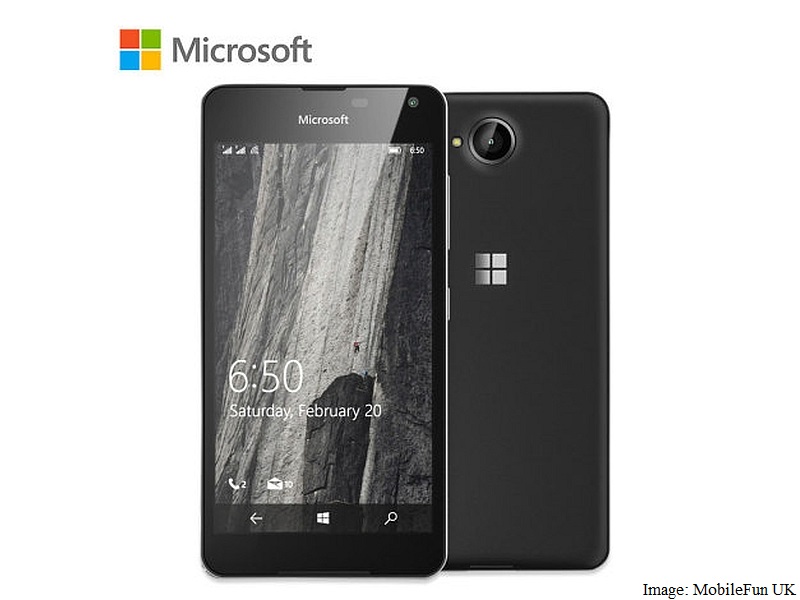 Although we are yet to witness the launch of the Microsoft Lumia 650 smartphone, a third-party online retailer has already made the device available for pre-orders in the UK. The listing also reveals partial information about the handset specifications.

The Microsoft Lumia 650 listing page on the MobileFun UK website shows the Black colour variant of the unlocked smartphone priced at GBP 199 (roughly Rs. 19,400). As for the specifications, the LTE-enabled handset features a 5-inch HD (720x1280 pixels) resolution IPS LCD display with pixel density of 294ppi and packs a quad-core SoC (unspecified) clocked at 1.1GHz, clubbed with 1GB RAM.

The Windows 10 Mobile device houses an 8-megapixel rear camera along with an 8GB inbuilt storage, which can be expanded via a microSD card (up to 128GB). As per the listing page, Lumia 650 users will also receive 30GB of free OneDrive cloud storage. The upcoming smartphone supports Wi-Fi, Bluetooth v4.1 with A2DP, GPS, and Micro USB connectivity.

Weighing 150 grams, the Microsoft Lumia 650 is backed by a 2000mAh Li-ion battery. Since it is one of the latest smartphones by Microsoft, it will come pre-installed with apps such as Microsoft Edge browser, Word Flow keyboard, along with the new Action Centre, and real-time Live Tiles.

It is worth noting that all the aforementioned specs corroborate with the previously leaked details. Some of the other specifications and features tipped are Qualcomm Snapdragon 210 or 212 processor; 5-megapixel front-facing camera; Qualcomm Quick Charge 2.0, and dual-SIM configurations.

Based on preliminary reports, Microsoft is gearing to launch its Lumia 650, which is also being tipped as the "last Lumia" smartphone, on February 1. After the launch of the Lumia 650 smartphone, the Redmond giant is said to concentrate on its Windows 10 Mobile-based Surface Phone range and will no longer launch smartphones under the Lumia moniker.