Microsoft seems to still have a few Nokia phones up its sleeves (at least feature phones), as the company has announced the affordable Internet-ready Nokia 215 and Nokia 215 Dual SIM.

The Redmond giant has revealed that both the Nokia 215 and Nokia 215 Dual SIM will be initially rolled out in Middle East, Africa, Asia, and Europe in the first quarter. Both the handsets will be available in "select markets" at just $29 (Rs. 1,838 approximately) before taxes and subsidies.

The Nokia 215 and Nokia 215 Dual SIM share common specifications except that the latter also features dual-SIM support. Both the handsets support Micro-SIM. 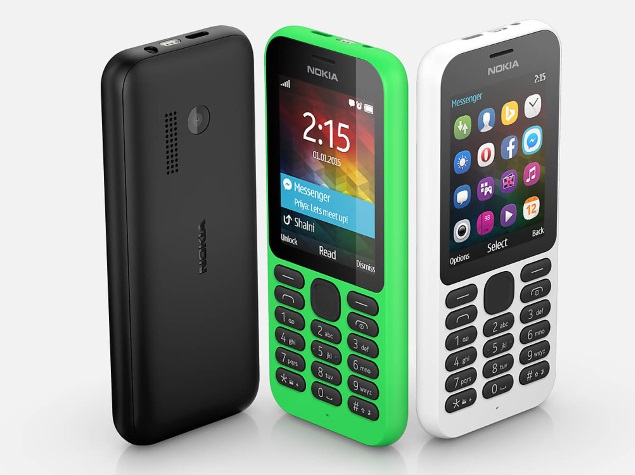 Both the handsets sport a 0.3-megapixel fixed-focus camera and run on Series 30+ operating system. Connectivity options on the handsets include Bluetooth 3.0, GPRS, and Micro-USB.

The Nokia 215 and Nokia 215 Dual SIM come with Opera Mini Browser and Bing Search. The handsets pack a built-in torchlight and also include stereo FM radio. Both the features phones will be available in a choice of colours, namely - Bright Green, Black and White.

"2015 will be the year the world gets (even more) connected. For only $29, the new Nokia 215 helps Microsoft connect the next billion to the Internet for the first time," the company said on its Lumia Conversations blog.