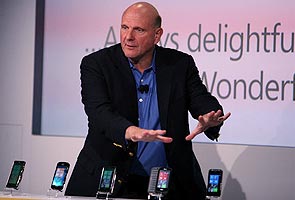 Highlights
Microsoft on Monday formally unveiled its Windows Phone 7 mobile operating system, which it hopes will give it a greater presence in the rapidly expanding market for smartphones.

Phones running the new software will be available on AT&T's network starting on Nov. 8, said Steven A. Ballmer, Microsoft's chief executive, at a news conference in New York.

Later in the year, the phones will be available from T-Mobile, and in 2011, from Verizon and Sprint. AT&T will initially offer three phones, at $200 each.

In all, the operating system will run on nine new phones, made by LG, Samsung, HTC and Dell, Mr. Ballmer said. Some will have keyboards, he said, while others will be exclusively touch screen.

Windows Phone 7 has been in production for two years, and is the culmination of a long effort by Microsoft to assert itself in the smartphone market, which has grown exponentially over the last few years.

Smartphones now account for 23 percent of all mobile phones sold in the United States, according to the research firm Nielsen. Apple's iPhone, Google's Android operating system and Research In Motion's BlackBerry have taken the lead in new sales, while Microsoft has lagged behind.

Microsoft's earlier mobile software was based on the design and interface of its Windows desktop operating system. Although those phones showed some early promise, their growth slowed drastically when Apple introduced the iPhone in 2007.

Earlier this year, the company released the Kin, a series of phones aimed at younger users with integrated social networking. But the products sold poorly and were withdrawn from stores 48 days after their release.

Microsoft has tried to distinguish Windows Phone 7 devices from others, especially the iPhone, by promoting features that allow users to personalize the look and feel of their phones. In his remarks on Monday, Mr. Ballmer stressed these features, including ones that allow updates from social networks and messaging services to appear automatically.

"We focused in on how real people really want to use their phones when they are on the go," he said.

Microsoft also plans to introduce a new app marketplace for the Windows Phone 7 platform, company officials said in interviews after the news conference, and is working with partner developers to build mobile applications for the new devices.

For mobile application developers, it is one more challenge. They already struggle with trying to decide which platforms to focus on, primarily the iPhone and Android operating systems.

Consumers will be able to integrate the new phones with a number of Microsoft products, including Zune music and video content, the Bing search engine, business products like Microsoft's OneNote software and the Xbox gaming platform.

Some developers plan to build games that can be played on both the Xbox 360 and Windows Phone 7, Microsoft officials said.

The AT&T phones will work with its U-verse TV service, allowing users to download television shows to their devices, among other features.