Microsoft had a lot to share at the first day of the Build 2015 conference. After showcasing the HoloLens and Continuum, announcing Microsoft Edge, as well as further detailing the Windows Universal Platform, the Redmond-based tech giant on Wednesday shared more details about on the design philosophy it was following for Windows 10's user interface design, along with some detail on upcoming changes to Windows 10 for phones.

Speaking of how much the firm has learnt from feedback since the January Technical Preview, Albert Schum, lead of the Design Team of Microsoft's Operating Systems Group, detailed the current state of progress in a company blog post.

"The builds you see have many different parts of Windows 10 in various states of being finished. The core code has come a long way-it's generally reliable, with good battery life, and you've probably noticed that your phone calls work very well. However, many of the apps in these flights are still early code, built as universal apps that run across PC and phone, but without the tailoring completed that makes them adapt to the phone-size screen and our desired phone interaction model. Thus, what you're seeing today are apps only partially-adapted for the phone UI that we intend to ship when we're finished."

Moving forward with the 'transportation graphics and the International Typographic Style' it had adopted with Windows Phone 7, the company said it is now trying to build a common foundation that incorporates common controls across Windows 10 devices, while still providing flexibility enough to use the Universal App platform. Microsoft is calling this adaptive UX, design guidelines of which are strongly highlighted in another one of its announcements from the conference - the Windows 10 Continuum feature - where a Windows 10 phone can produce a desktop interface on an HDMI display, complete with mouse and keyboard controls.

Giving a hint as to what was to come for Windows 10 for phones and the firm's ideas on common controls that can be engineered in apps, Schum laid special emphasis on the Menu icon (hamburger) and its varied uses across form factors, apart from changes based on feedback for Outlook Mail, Calendar, Task Switching, People, Photos, and the new Microsoft Edge browser - the new default browser for Windows 10.

The hamburger or Menu icon is the three-dot control seen across website, apps, and even in the competing Android and iOS platforms. Used as the home navigation element in most interfaces, Schum explained how sometimes the UX or a particular interface doesn't necessarily dictate the use of one, of how "sometimes the app bar, tabs, pivot, or a combination could be better controls for the job." With the new adaptive UX, Schum said Microsoft is making it "possible for an app to have both hamburger and pivot controls - but to display the right control at the right time on the right device."

For Outlook and Calendar for phones, Schum said Microsoft is not moving away from the layout Windows Phone 8 users were familiar with - with commonly-used commands at the bottom along with an app bar showing titles with the icons. Recent builds for Windows 10 devices contained an "incomplete implementation of the 'command bar' from Office", a decision that left a lot of users unhappy. In Windows 10, the firm will be using the same design profile but with updated controls at the bottom. Outlook Mail will get back features like Unified Inbox and Multi-Select in future updates for Windows 10. Schum spoke of the Universal Outlook apps also introduced at the conference, and that while their UI will be partly rewritten from scratch along with a new codebase - the firm is committed to it for the long-run.

Upcoming experiments with the Outlook app will include buttons and a hamburger icon at the bottom to help switch between the three panes of folders, list of messages, and messages familiar from the desktop. Users will be able to pin folders, while they can easily switch over to the Calendar from Outlook. The firm will be closely monitoring usage to really see if these changes are useful.

For Calendar, Microsoft has included the mini-month view in build 10051. It is difficult to access it as the firm has not made it discoverable. The users would have to tap on the month name to access the feature. For large screen handsets the number of weeks shown in a mini-month will be increased. Also, week view in landscape is in the works and might be available in future.

The Microsoft Edge browser in Windows 10 will be featuring a simple and contemporary design, which will be constant in all the platforms ranging from PCs to mobile handsets. Based on the feedback from Insiders, the firm is said it is "investigating designs for this experience." However, the final result is not yet ready to be shared. 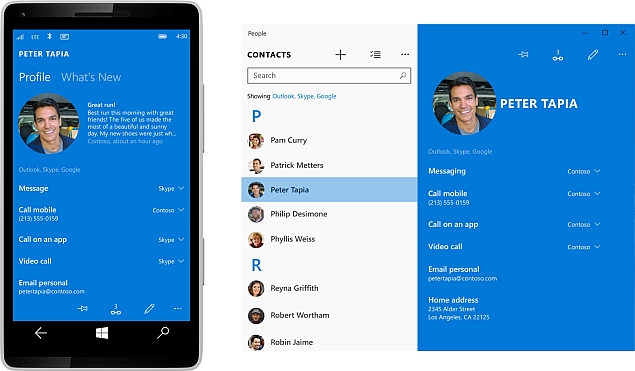 In the People app, Microsoft says it will stick to using circles to represent people instead of the squares users say is consistent with earlier Windows Phone iterations. "We did a lot of thinking about this during our planning stages for Windows 10, and what we tried to accomplish was to help the people in your life really stand out visually," the post mentioned, while giving a peak at what a future contact page would look like in the People app.

For the Photos app, the firm is concentrating on how the experience transitions between form factors, and the use of the menu icon along with pivot controls. At present, for the phone, more emphasis is being placed on swipe-based pivot controls between collections and albums on phones, and the Menu icon for the PC. The app will also help keep images organised by automatically bundling them images into albums, while also making it easy to get images from "ANY" device.

Under the Task Switching section the firm is reconsidering the swipe direction in task switching. In current builds of Windows 10 for phones, the reading order for tasks is from left-to-right, the same as on PC. Windows Phone historically has had the reading order from right-to-left. The firm is considering unifying the interface between PC and mobile in this manner, but is looking for feedback and usage patterns to really see if it's worth it for users to relearn.

To wrap things up, Schum said users should remember Windows 10 is being treated "as a service" and that Microsoft aims to provide ongoing updates and improvements through the Window Store, including for all the apps discussed in the blog post.