The leaked Geekbench listing claims that Yu Yu5050 be a high-end device will, unlike previous Yu smartphones. It is said to feature a 1.5GHz octa-core Snapdragon 810 (MSM8994) processor coupled with 4GB of RAM. The listing also hints that the handset will feature a 5.2-inch full-HD display and will run Android 5.1.1 Lollipop-based build of CyanogenOS. The Yu5050 is seen scoring 1353 in single-core test and 4622 in the multi-core test.

The Indian import/ export site, Zauba, lists the Yu5050 featuring dual-SIM support; a 5.2-inch display, and microSD card support. The Micromax Yu5050 smartphones were shipped from China, and had a declared value of Rs. 20,295 to Rs. 20,752. To be noted is that import/ export website price listings are only declared values, and usually are not accurate reflections of actual market price. 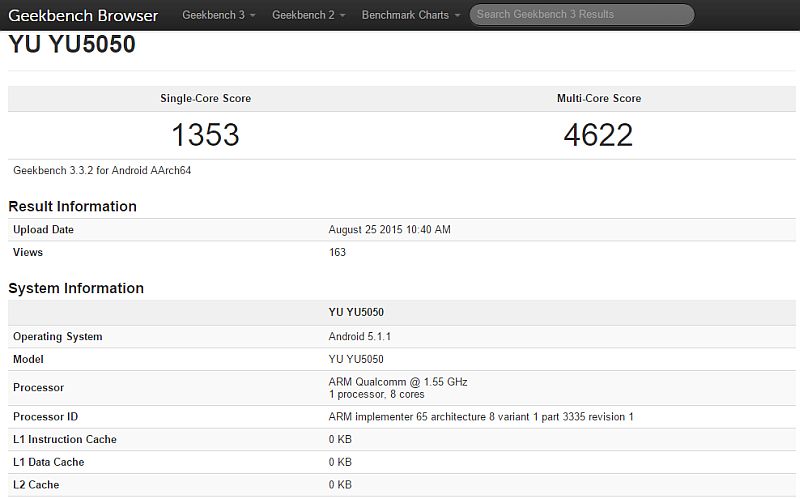 The Micromax Yu4711, on the other hand, is seen featuring a quad-core Qualcomm Snapdragon 410 (MSM8916) processor clocked at 1.2GHz coupled with 1GB of RAM. Much like Yu5050, the Yu4711 is also likely to run Android 5.1.1 Lollipop-based CyanogenOS. The Geekbench listing for the Yu4711 shows a single-core score of 263 and multi-core score of 743. Both the Geekbench listing of the unannounced Yu handsets were first reported by Tech Gadgetsz.

Micromax's Yu brand started sending invites last week for the launch of its next smartphone (or smartphones) on Tuesday. The media invite included a tagline that read, "When future meets past. The next wonder will be unveiled" and was accompanied by an image of a handset. The company even started teasing the upcoming devices via social platforms.

We will have to wait till Yu's event on Tuesday event to see what the company has in store next for consumers.