Both handsets will be available on retail shelves in India from early July, according to the official Windows blog.

The Canvas Win W092 and Canvas Win W121 feature dual-SIM support, making them some of the few such Windows Phone devices - the Lumia 630 Dual SIM (announced in April and launched in India in May) was the first dual-SIM Windows Phone.

The Canvas Win W121 (seen above) is nearly identical with the Canvas Win W092, though it features a larger display and a high-resolution camera. The Canvas Win W121 bears a 5-inch HD (720x1280 pixels) IPS display, and is powered by 1.2GHz quad-core Snapdragon 200 (MSM8212) SoC that is coupled with 1GB of RAM.

It once again features 8GB of built-in storage that can be expanded via microSD card (up to 32GB). The Canvas Win W121 bears an 8-megapixel rear autofocus camera with flash, and a 2-megapixel front-facing camera. It also features 2000mAh battery that's rated to deliver up to 8 hours of talk time and 150 hours of standby time. It also has a leather finish on the rear panel. Connectivity options include 3G, GPRS/ EDGE Wi-Fi, Bluetooth, and GPS. 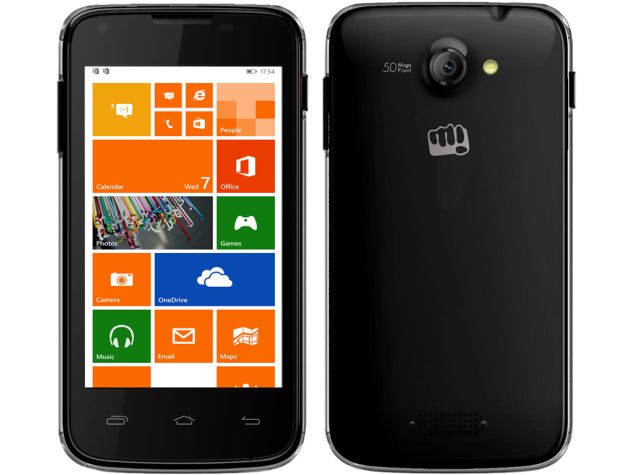 The Micromax Canvas Win W092 (seen above) features a 4-inch WVGA (480x800 pixels) IPS display, and is powered by a 1.2GHz quad-core Qualcomm Snapdragon 200 SoC, coupled with 1GB of RAM. It comes with 8GB of built-in storage that is expandable via microSD card (up to 32GB). It features a 5-megapixel rear camera, and a 0.3-megapixel front-facing camera. It is powered by a 1500mAh battery. In terms of connectivity options, it features 3G, Wi-Fi, GPRS/ EDGE, Micro-USB and Bluetooth.

Commenting on the launch, Sanjay Kapoor, Chairman, Micromax said, "With our vision to democratize technology and belief in providing consumers with choice of platforms, we are pleased to introduce a new range of Windows-based phones. I am pleased that Micromax is the only Indian mobile phone brand to be present across the two most popular operating platforms in the world."