Micromax Dual 5, the company's first dual rear camera smartphone, has been launched in India. The Micromax Dual 5 price is Rs. 24,999, and it will be available via Flipkart from April 10. It will also be sold from the Micromax E-Store, as well as from offline stores. Registrations for the phone have started via the company's site.

The biggest highlight of the Micromax Dual 5 is its dual rear camera setup. The smartphone is the first of the Micromax Dual series, with a Dual 4 smartphone due to be launched soon. Micromax has used two 13-megapixel Sony IMX258 sensors, one for monochrome light and the other for RGB (colour), featuring an f/1.8 aperture. A colour temperature sensor is used to optimally merges the two captured images. One of the camera sensors is tasked with focus and the other is tasked with capturing depth of field information. The dual camera mode is enabled by default on the smartphone, and enables other modes like Bokeh Mode and Low-Light Mode. Other camera modes on the smartphone include Pano, Pro, Slow Shutter, Anti-Haze, Macro, and Monochrome. It also captures video in 4K UHD resolution, while the company is touting 3D video functionality thanks to the dual rear cameras.

On the front, the Micromax Dual 5 sports another 13-megapixel camera, with a 1.12-micron pixel Sony IMX258 sensor. It bears an f/2.0 aperture and features a soft selfie flash module. Other front camera features include an integrated SmartBeauty mode, gesture control, and a GIF maker.

Micromax is also touting the Dual 5's design, and it is claimed to be built from a single slab of aircraft-grade aluminium. It features 3D antenna technology, keeping the antennae on the metal frame of the smartphone. Micromax is also boasting of an additional customisable key, and the integration of a panic button (used by pressing the power button thrice). 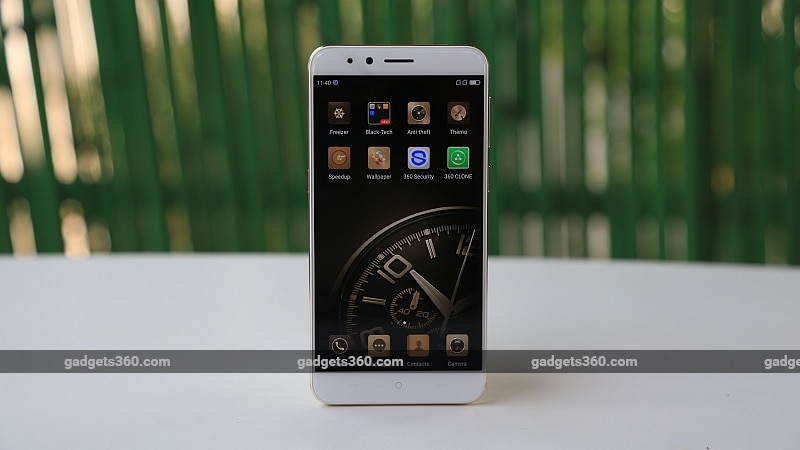 The smartphone bears a fingerprint sensor on the rear panel that is claimed to recognise prints in up to 0.2 seconds. The Dual 5's fingerprint sensor functions as a selfie key and offers other gestures controls, and a 360-degree acceptance angle. It also powers the Secure Vault feature of the phone, where a separate private profile will be created for the primary user that stores private data and can only be unlocked by their fingerprint. It comes with an independent security chip, which is a separate chip for storing passwords and fingerprints, and uses EAL 5+ military-grade security.

The Micromax Dual 5 bears 128GB of inbuilt storage, and users can expand it via microSD card (up to 128GB) in a hybrid dual-SIM card configuration. Connectivity options include 4G VoLTE, Wi-Fi 802.11ac, Bluetooth v4.1, 3.5mm audio jack, and USB Type-C. Sensors on board include accelerometer, ambient light sensor, gyroscope, infrared sensor, and proximity sensor. It sports a 3200mAh battery with Quick Charge 3.0 that enables the smartphone to be charged 95 percent in 45 minutes, and 10 minutes of charging is claimed to provide up to 4 hours of usage time. It weighs in at 164 grams.

The company is also touting a SafeSwitch feature that is meant to prevent loss of data upon theft. If the SIM card in the phone is pulled out, and if the prompted password is not entered within 30 seconds, the phone will lock including all buttons - thus, it can't be turned off and allows for tracking, the company says. After 60 minutes of the SIM removal, and if no password is entered yet, the phone will be wiped. Even without the SIM removal trigger, if someone tries hacking the password or pattern lock, their photo will be taken and sent to a pre-selected number.

The Micromax Dual 5 smartphone will come with the Micromax Care app, and the company also announced a 24-hour hour service promise, and a 1-year replacement warranty.