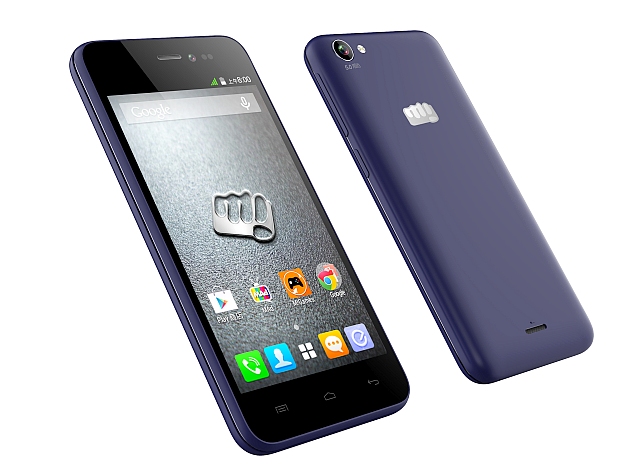 Micromax on Wednesday launched its new Canvas-branded smartphone, the Canvas Pep, at Rs. 5,999. The smartphone is available to buy via both online and offline stores, according to the company. The handset is yet to be listed on the company website.

The dual-SIM Micromax Canvas Pep runs Android 4.4.2 KitKat out-of-the-box with no word on an Android 5.0 Lollipop OS update. It comes with a 4.5-inch (480x854 pixels) FWVGA display, and is powered by a 1.3GHz quad-core (unspecified) processor coupled with 1GB of RAM.

The amount of inbuilt storage on the Canvas Pep has not been disclosed, but we've contacted the company and will update the article once they respond. The smartphone features storage expandability via microSD card up to 32GB. It sports a 5-megapixel fixed-focus rear camera with LED flash, while there is a front-facing digital (1.3-megapixel) camera also on board.

On the connectivity front, the Micromax Canvas Pep offers 3G, GPRS/ EDGE, Wi-Fi 802.11 b/g/n, Micro-USB, and Bluetooth options. The smartphone packs a 1700mAh battery, which is rated to deliver up to 210 hours of standby time. It will be available in Pristine White and Mystic Blue colour variants.

The Micromax Canvas Pep specifications match with those of Bolt A82, which was launched this week. The handset however bears 512MB of RAM and an 1800mAh battery.

Micromax on Tuesday also announced the Android 5.0 Lollipop update rollout for its recently launched Canvas Xpress smartphone, which shipped with Android 4.4.2 KitKat out-of-the-box. The Android 5.0 Lollipop update for the Micromax Canvas Xpress is being pushed out over-the-air (OTA) and users should receive a notification informing them about the update when they connect to the Internet, the company said.

Xbox One to Get Universal Windows App Support This Year: Report
Google Creates 'Android Chorus' With 300 Android Smartphones and Tablets