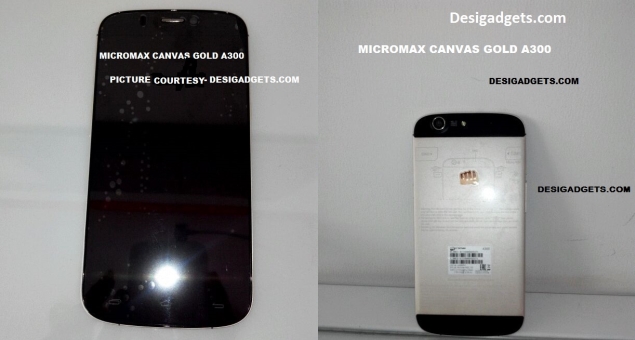 Micromax may not be ready to let the cat out of the bag and show us what the next Canvas smartphone will look like, but that hasn't stopped the leaks from pouring in. The first purported images of Micromax's next high-end Canvas-series smartphone, believed to be dubbed Canvas Gold (A300) have been leaked alongside pricing and specifications details.

The site has also leaked the alleged Canvas Gold in live images which show the rumoured handset in its full glory. Leaked images show the front and rear panel of the smartphone. In addition, MMXNewscaster, a source of leaks related to Micromax mobiles, has leaked an image of the yet-to-be-announced Canvas Gold in Black Gold and White Gold colours.

Micromax A300 in White Gold and Black Gold. pic.twitter.com/DWfKlcQY97

Notably, Micromax has already introduced three Android 4.4 KitKat-based smartphones that include - Canvas Entice (A105)which went on sale recently, while the other two are the Micromax Unite 2, and Canvas Engage.

Further fuelling the speculation about an imminent launch, Micromax has started sending invitations for an event titled "Witness our new Canvas", scheduled on June 16. We expect that the company might officially announce the Canvas Gold on Monday [June 16].