Notably, the Micromax Canvas Entice (A105) went on sale at the end of May via an e-commerce website for Rs. 6,999, and is the company's third smartphone running the most recent Android 4.4 KitKat version, with the other two the Micromax Unite 2, and Canvas Engage.

The Indian smartphone market has suddenly been crowded with Android 4.4 KitKat smartphones and we can credit Motorola for kicking off the trend with its popular budget Moto E smartphone.

The Micromax Unite, on the other hand, seems to be a part of the company's new Unite Android smartphone series, with wide language support. The first Unite series smartphone was launched as Micromax Unite 2 in May.

The Micromax Canvas Entice is a dual-SIM (GSM+GSM) device with dual standby support. It comes with a 5-inch (480x800 pixels) IPS display and is powered by a 1.2GHz quad-core Broadcom BCM23550 processor with 512MB of RAM. 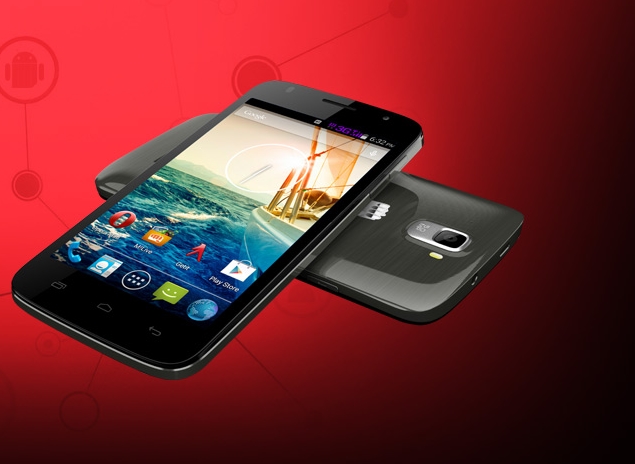 The Canvas Entice comes with 4GB of inbuilt storage, which is further expandable via microSD card (up to 32GB). It sports a 5-megapixel autofocus rear camera with LED flash, while there is a secondary 0.3-megapixel front-facing camera.

On the connectivity front, the Canvas Entice includes 3G, Wi-Fi, Micro-USB, and Bluetooth. The smartphone packs a 1900mAh battery which is rated to deliver up to 150 hours of standby time and up to 5 hours of talk time. The Canvas Entice measures 10.5mm thick, while it weighs 180 grams.

The Micromax Unite, much like the Unite 2 (Review | Pictures), features support for 21 preloaded languages with Reverie Multilingual Pack.

The smartphone is a dual-SIM (GSM+GSM) device with dual standby support and unlike the Unite 2 runs the now-dated Android 4.3 Jelly Bean. It sports a 4-inch WVGA (480x800 pixels) IPS display. The Micromax Unite is powered by a 1.2GHz quad-core Qualcomm Snapdragon 200 (MSM8212) processor coupled with 1GB of RAM.

It sports a 5-megapixel rear camera with LED flash, while it also houses a 0.3-megapixel front-facing camera. The smartphone includes 8GB of inbuilt storage which is further expandable via microSD card (up to 32GB).

It packs a 1500mAh battery which is rated to deliver up to 5.5 hours of talk time and up to 140 hours of standby time. The Micromax Unite comes with GPRS/ EDGE, 3G, Wi-Fi 802.11 b/g/n, Bluetooth, GPS and Micro-USB connectivity options.