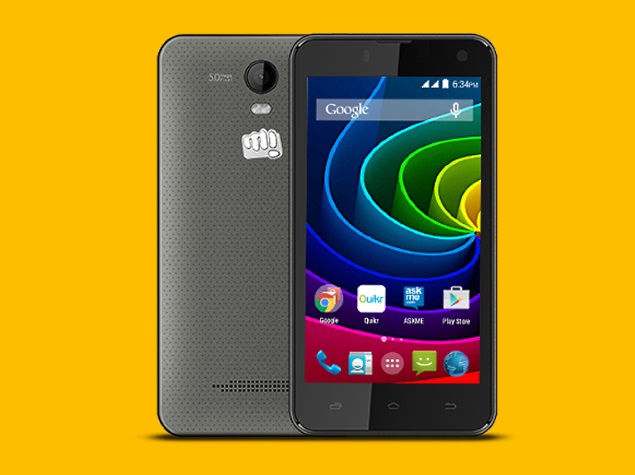 Micromax has introduced a new Bolt-series smartphone, the Bolt Q335, which is now listed on the company's site.

There is no official word on the availability and pricing details of the Micromax Bolt Q335; however, we expect the company will start the sale of the smartphone in the coming days.

The Bolt Q335 is a dual-SIM (GSM+GSM) device which runs Android 4.4.2 KitKat out-of-the-box. It comes with a 4.5-inch (480x854 pixels) FWVGA TFT display. The smartphone is powered by a 1.2GHz quad-core Spreadtrum (SC7731) processor coupled with 512MB of RAM. It comes with 4GB of inbuilt storage, which is further expandable via microSD card (up to 32GB). It sports a 5-megapixel rear fixed-focus camera alongside 2-megapixel front camera. The rear camera is accompanied by an LED flash.

On the connectivity front, the Micromax Bolt Q335 offers GPRS/ EDGE, 3G, Wi-Fi 802.11 b/g/n, Micro-USB, and Bluetooth options. It packs a 1650mAh battery, which according to the official listing is rated to deliver up to 6 hours of talk time and up to 280 hours of standby time. It is currently listed in just a Black colour variant.