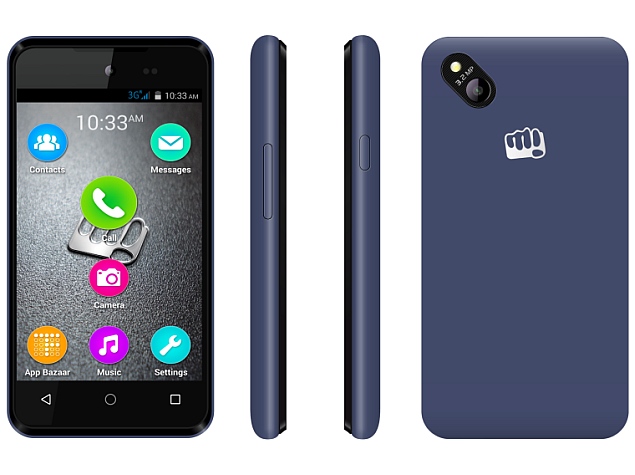 Micromax has launched the Bolt D303 budget smartphone in India, priced at Rs. 3,499. The highlight of the smartphone at its price is 3G connectivity and its support for 10 Indian regional languages, as well as its 'Swipe' feature that the company says enables easy input, apart from a special messaging service for easy translations.

The dual-SIM Bolt D303 comes with 4GB of built-in storage that is expandable via microSD card (up to 32GB). Connectivity options include 3G, Wi-Fi, GPS, Bluetooth 4.0, Micro-USB 2.0, and a 3.5mm audio jack. The smartphone is powered by a 1300mAh battery, and is rated to deliver up to 4.5 hours talk time, and 245 hours of standby time.

Micromax last month launched the Canvas Selfie Lens smartphone, priced at Rs. 8,299. It comes with a clip-on wide-angle lens. The new smartphone from Micromax will come with bundled data offer from Vodafone offering up to 500MB 3G data free for first two months. The company has announced that the Micromax Canvas Selfie Lens smartphone will be available via online and offline stores in White and Champagne as well as Moondust Grey colour variants.