The Micromax Bolt A37B runs Android 4.2 Jelly Bean out-of-the-box. The new budget Android smartphone is a dual-SIM (GSM+GSM) device, and supports regular SIM size. It comes with 3.5-inch TFT display with 320x480 pixels (FWVGA) resolution, and is powered by a 1GHz MediaTek MTK6572M processor along with 256MB of RAM. 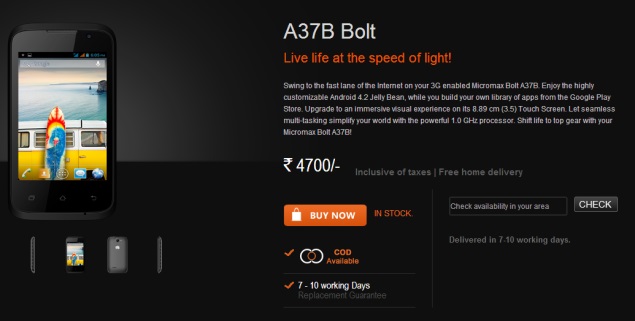 It includes 512MB of inbuilt storage which is further expandable up to 32GB with microSD card. The Micromax Bolt A37B sports a 2-megapixel rear camera, though there is no word on the front camera. The device packs a 1450mAh battery, which according to the listing can give a standby time of up to 256 hours, and talktime of up to 5.5 hours.

Recently, two Micromax smartphones, the Canvas Turbo Mini and Bolt A71, were available via Micromax's online store at Rs. 14,490 and Rs. 6,750 respectively.

The Micromax Canvas Turbo Mini (A200) features a 4.7-inch (720x1280 pixels) HD IPS display. It is a dual-SIM (GSM+GSM) device, which runs Android 4.2 Jelly Bean out-of-the-box. The official listing of the smartphone notes that the device supports one regular SIM, and one Micro-SIM.

The Micromax Bolt A71 on the other hand runs Android 4.1.2 Jelly Bean and is a dual-SIM phablet with support for GSM+GSM. It features a 5-inch WVGA (480x800 pixels) display, and is powered by a 1GHz ARM Cortex-A5 processor along with 512MB of RAM.