Unfortunately, Micromax has not revealed official pricing and availability details of both the Bolt A24 and Bolt A71.

The Micromax Bolt A24 runs Android 2.3 Gingerbread out-of-the-box. The new budget Android smartphone is a dual-SIM (GSM+GSM) device, and supports regular SIM size. It comes with 2.8-inch TFT display with 240x320 pixels (QVGA) resolution, and is powered by a 1GHz ARM Cortex A5 Spreadtrum SC6820 processor along with 256MB of RAM.

The Bolt A24 includes meagre 100MB of inbuilt storage which is further expandable up to 16GB with microSD card. It sports a 0.3-megapixel rear camera with flash, though there is no word on the front camera.

Unfortunately, the official listing does not reveal the Bolt A24's battery capacity, though claims that the smartphone can deliver up to 4 hours of talktime and up to 150 hours of standby time. 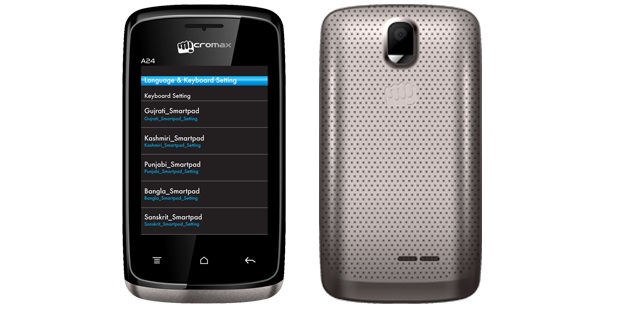 Connectivity options on the Bolt A24 include Bluetooth, Wi-Fi, Micro-USB, GPRS, and EDGE. Notably, the Bolt A24 does not support 3G connectivity. The smartphone also comes preloaded with apps such as M!Live, Bubble X Slice, Hike and Opera Mini.

The Micromax Bolt A71 on the other hand runs Android 4.1.2 Jelly Bean and is a dual-SIM phablet with support for GSM+GSM. It features a 5-inch WVGA (480x800 pixels) display, and is powered by a 1GHz ARM Cortex-A5 processor along with 512MB of RAM

The Bolt A71 sports a 2-megapixel fixed-focus rear camera accompanied by an LED flash and also includes a VGA front-facing camera. It comes with 512MB inbuilt storage, which can be expanded up to 32GB with the help of a microSD card. The Micromax Bolt A71 packs a 2000mAh battery which, as per the company's online listing, can deliver up to 5 hours of talktime and up to 200 hours standby time. Connectivity options on the phablet include Bluetooth, Wi-Fi, GPRS, EDGE, GPS/ AGPS and 3G. The Micromax Bolt A71 measures 148.9x78.6x10mm.