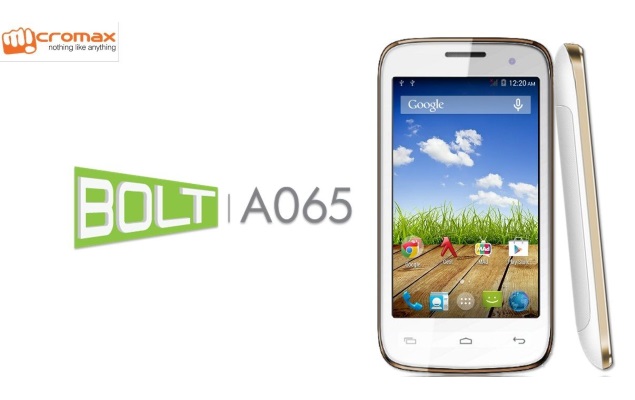 What appears to be Micromax's most affordable Android 4.4.2 KitKat-based smartphone, the Bolt A065, is now available online, priced at Rs. 3,799. However, the smartphone is yet to be officially announced by the company.

The Micromax Bolt A065 will be up against some other budget KitKat smartphones recently launched in India, such as the Karbonn A5 Turbo, Celkon Campus A35K, Lava Iris 310, Karbonn A1+ Super, Spice Smart Flo Mi-359, Celkon Campus Mini A350, and Sunstrike Rage Swift - all priced below Rs. 4,000.

It sports a 2-megapixel fixed focus rear camera with LED flash, and also houses a 0.3-megapixel front-facing camera. The Bolt A065 includes 4GB of inbuilt storage which is further expandable via microSD card (up to 32GB).

The smartphone is available in White colour only at eBay and Saholic. Notably, eBay is selling the Micromax Bolt A065 at Rs. 4,699, while Saholic has a discounted price tag of Rs. 3,799.

It packs a 2000mAh battery which is rated to deliver up to 7 hours of talk time and up to 900 hours of standby time. The smartphone comes with GPRS/ EDGE, Wi-Fi 802.11 b/g/n, Bluetooth, GPS and Micro-USB connectivity options. Unfortunately, the Bolt A065 does not support 3G, according to online retailers.

Micromax on Wednesday listed the Android 4.4.2 KitKat-based Micromax Canvas XL2 on the company's site without revealing pricing or availability details.