Micromax Bolt A064 With Android 4.4.2 KitKat Listed on Company's Site

As of now, there is no official word on the availability and price details of the Micromax Bolt A064; though, we expect that the company will likely announce the availability of the smartphone soon. 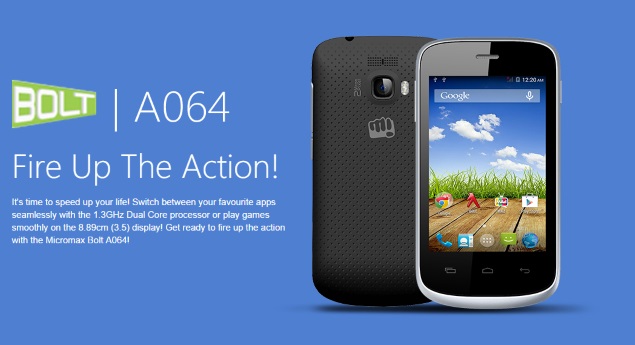 The smartphone is powered by a 1.3GHz dual-core MediaTek (MT6571) processor coupled with 512MB of RAM. It comes with 4GB of inbuilt storage, which is further expandable via microSD card (up to 32GB).

The smartphone packs a 1400mAh battery, which according to the official listing is rated to deliver up to 5 hours of talk time and up to 150 hours of standby time on 2G network. Unfortunately, the Bolt A064 does not support 3G connectivity.

The domestic handset maker listed the Micromax Canvas 4 Plus on the company's site soon after the handset went on sale via a couple of e-commerce websites, priced at Rs. 16,750.