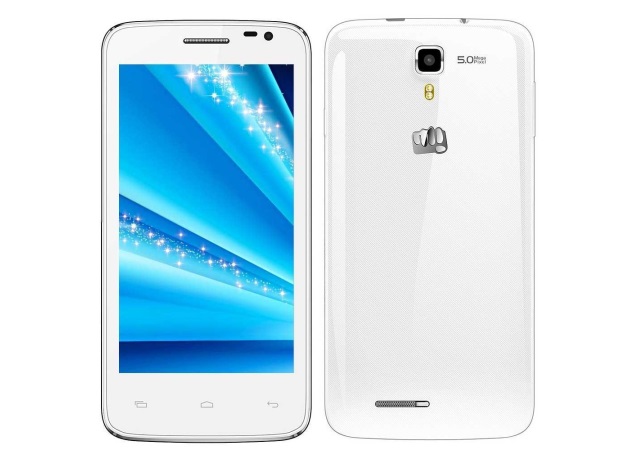 Micromax has quietly introduced its latest phablet, A77 Canvas Juice, via an ecommerce website. The Micromax A77 Canvas Juice is now listed on HomeShop18 at Rs. 7,999. However, the smartphone is out of stock, at the time of writing this post.

The Micromax A77 Canvas Juice runs Android 4.2 Jelly Bean and is a dual-SIM phablet with support for GSM+GSM lines and dual standby. It features a 5-inch FWVGA display with 480x854 pixels resolution. The phablet is powered by a 1.3GHz dual-core processor along with 1GB of RAM. 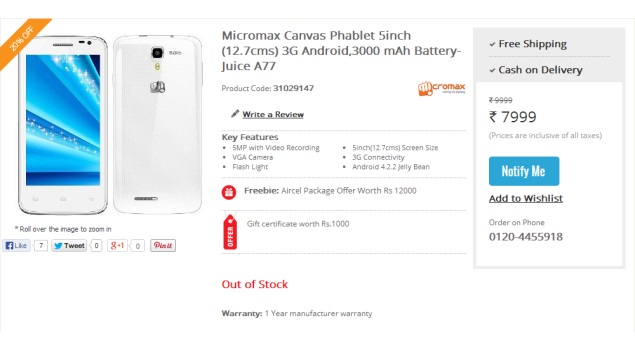 It sports a 5-megapixel autofocus rear camera accompanied by an LED flash and also includes a VGA front-facing camera. It comes with 4GB inbuilt storage, which can be expanded up to 32GB with the help of a microSD card. The Micromax A77 Canvas Juice packs a 3000mAh battery which, as per the online retailer's listing, can deliver up to 10 hours of talktime and up to 250 hours standby time. Connectivity options on the phablet include Bluetooth, Wi-Fi, GPRS, EDGE, GPS/ AGPS and 3G. The Canvas Juice measures 150.5x76.2x10.2mm and weighs about 100 grams.

Recently, Micromax unveiled the Canvas Magnus in India at Rs. 14,999. The Android 4.2 Jelly Bean-based smartphone comes with a 5-inch IPS display with a 720x1280 pixels resolution. It is powered by a 1.5GHz quad-core processor (unspecified chipset) along with 1GB of RAM. The Canvas Magnus is a dual-SIM device with support for GSM+GSM.

The Canvas Magnus features a 12-megapixel rear camera with LED flash and full-HD video recording support, apart from a 2-megapixel front-facing camera, and a 2000mAh battery. Connectivity options on the device include Wi-Fi, Bluetooth, GPS/ AGPS, and 3G. It comes with 4GB of inbuilt storage which is further expandable up to 32GB via microSD card.