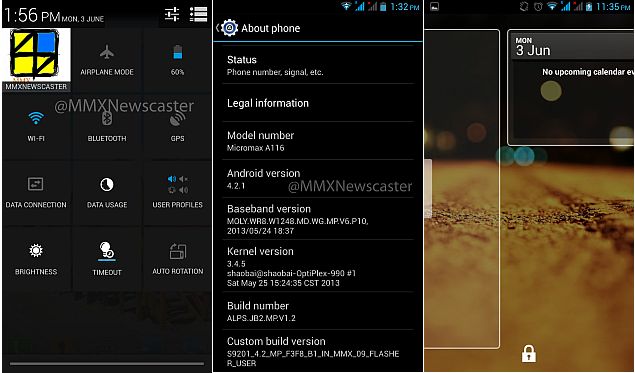 Micromax is reportedly rolling out Android 4.2 Jelly bean update to its flagship smartphone, the A116 Canvas HD.
According to Micromax focused website, MMX Newscaster, the update will not be available over the air and customers will need to visit Micromax service centres to get the update which will start rolling out this week. However, after the update, the smartphone will be able to get further updates over the air as it brings support for the same.

The site has also posted a few screenshots of the phone running the Android 4.2.1 build of the OS. The update brings the translucent notification tray to the phone and removes the custom toggles for settings such as Wi-Fi, Brightness, Rotation, Bluetooth, GPS, Data, Screen timeouts and profiles (for alerts and other notifications). Instead, it features the same setting toggles shortcut that's found in stock Android for quick access to Airplane Mode, Battery status, Wi-Fi, Bluetooth, GPS, Data connection, Data usage, Audio Profiles, Brightness, screen backlight Timeout and Auto Rotation.

The phone will get standard Android 4.2 features including lock screen notifications and the Daydream picture frame mode. The report also mentions that the update fixes the issue related to the phone not locking to GPS easily, and now the phone's GPS works fine and locks faster.

It also brings the missing Panorama mode to the Canvas HD's camera app.

Micromax had earlier started rolling out the Android 4.1 Jelly Bean update for the A110 Canvas 2 smartphone, while it shipped the A110Q Canvas 2 Plus with Android 4.2 Jelly Bean.

It's interesting to note that the Samsung Galaxy S III and the HTC One X and One X+ have still not received the Android 4.2 update. The HTC One, which is HTC's flagship phone for 2013, also runs on Android 4.1, the first iteration of the OS.