Mi CC9 Pro might not offer 5G support and may also miss out on a high-refresh-rate panel. 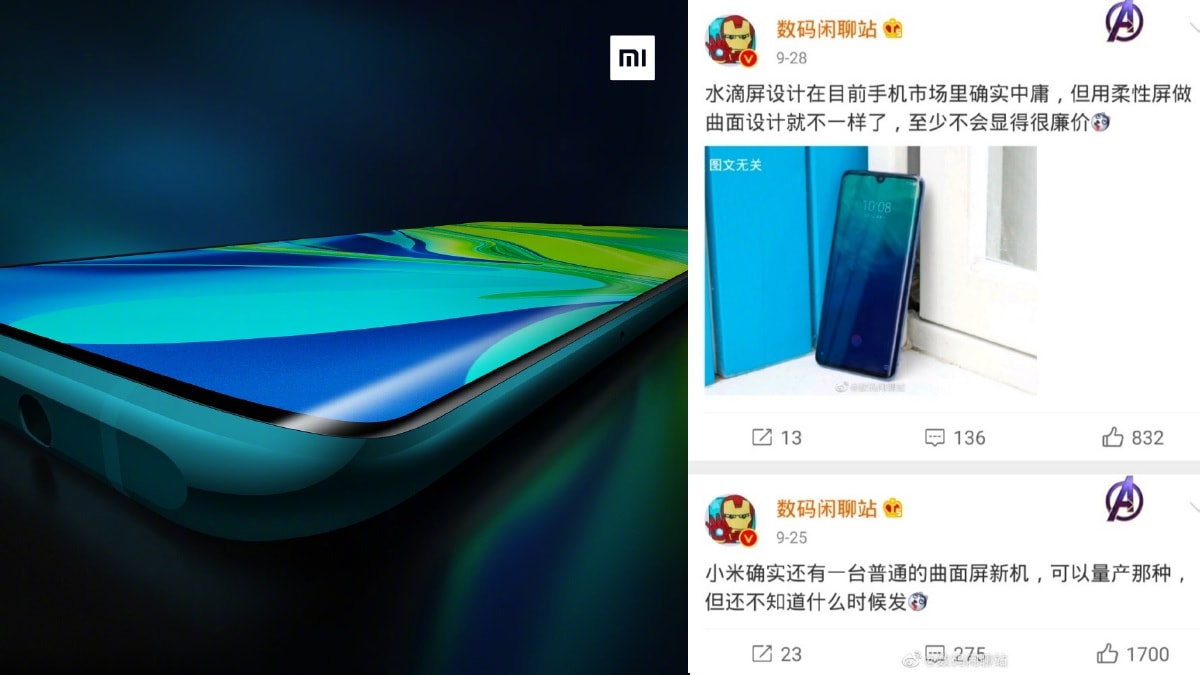 Xiaomi has been teasing the launch of its upcoming phone – the Mi CC9 Pro – for the past few days, revealing some important details such as a penta-lens camera setup, a 108-megapixel main camera, and 5x optical zoom support. After giving us our first glimpse of how the phone will look from the back, Xiaomi has now shared an official render that reveals the phone's curved OLED display. The Chinese company has also released a trailer that shows the Mi CC9 Pro in action, emphasising on its zooming capabilities. However, the phone might miss out on 5G support and a high refresh rate display.

The first teaser image shared by Xiaomi on Weibo highlights the Mi CC9 Pro's curved display, which has a subtle curvature and does not appear to be as drastic as the waterfall display on the likes of Vivo Nex 3 or the Huawei Mate 30 Pro. The bezels bordering the curved display appear to be uniformly thin alongside all edges. The frame has a curved profile on the sides, but the bottom edge appears to be flat, just like the one on the Huawei P30 Pro. The antenna line and the 3.5mm headphone jack are also visible alongside the bottom edge.

Xiaomi has also shared a video commercial for the Mi CC9 Pro that shows the phone's ‘Magic Green' colour variant in action, and also highlights its zooming capabilities. Xiaomi has already revealed that the Mi CC9 Pro will pack a telephoto camera that will support 5x optical, 10x hybrid, and 50x digital zoom. Product Manager of Xiaomi's CC series of phones, Cici, explained in a lengthy Weibo post that the Mi CC9 Pro will be the most cost-effective camera flagship in the market, as Xiaomi has kept the price in check despite the 108-megapixel camera module being priced 5x times higher.

However, it appears that the Mi CC9 Pro will miss out on two features that are quickly catching on – 5G support and a 90Hz refresh rate display. As per tipster Digital Chat Station on Weibo, the MiCC9 Pro won't offer 5G support and will also skip the trend of a high refresh rate display, which means its curved display will stick to the more conventional 60Hz refresh rate. The tipster also shared a live image of the phone, which highlights its curved display and also shows the position of the in-display fingerprint sensor. The Mi CC9 Pro is set to be unveiled on November 5 alongside the Mi TV 5 and the Mi Watch.