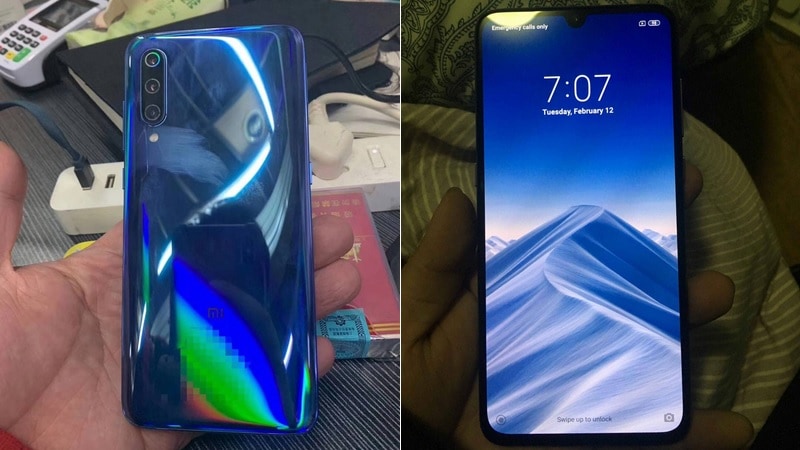 Xiaomi has already announced plans to launch the flagship Xiaomi Mi 9 at an event on February 20, the same day Samsung is expected to unveil the Galaxy S10 series. Ahead of Xiaomi's official launch event, alleged live images of the Xiaomi Mi 9 have leaked online, which give us a glimpse at the upcoming smartphone's design. The leaked set of photos indicates that the Xiaomi Mi 9 will sport a waterdrop notch. Additionally, Xiaomi has also teased that the company will showcase the Mi 9 at MWC 2019.

Starting with the alleged Xiaomi Mi 9 leaked images that recently surfaced on Twitter, the images show a device sporting a blue paintjob with a glossy rear finish. The vertically-stacked triple rear cameras are also shown up close in the leaked images and look similar to the layout on the smartphone's official promotional poster for the Chinese market. As per leaks, the Xiaomi Mi 9 is expected to feature a triple rear camera setup consisting of a primary 48-megapixel Sony IMX586 sensor, a 12-megapixel secondary sensor, and a 3D ToF sensor. The device is also rumoured to come equipped with a 24-megapixel Sony IMX576 front camera.

The leaked images also reveal a waterdrop notch, which falls in line with the previous rumours about the phone that have also tipped a 6.4-inch AMOLED screen as well as an in-display fingerprint sensor on the flagship smartphone. Moreover, the device will reportedly be powered by the Snapdragon 855, coupled with up to 8GB of RAM and 128GB of storage, while drawing power from a 3,500mAh battery with support for 27W fast charging. MIUI 10 based on Android 9 Pie is tipped to handle things on the software side. A Xiaomi smartphone, alleged to be the Xiaomi Mi 9, was spotted on Geekbench back in January and the listing revealed some of the details mentioned above.

Additionally, Xiaomi has also shared a teaser image on Twitter which shows the design of three camera lenses clubbed with the caption,” see you at MWC”, indicating that the company will showcase the Xiaomi Mi 9 at MWC 2019. It appears that following the Mi 9's official launch in China, the company might announce the device for the global market at the company's product launch event on February 24 at MWC 2019 and steal some limelight from the rival smartphone makers.