An earlier leak had claimed that the Mi 4c will be the company's first smartphone featuring the new USB Type-C port. Xiaomi Co-Founder and President Lin Bin has now confirmed the fact, and clarified that the handset will also support the common Micro-USB connector.

In a Weibo post, Bin has confirmed that the Xiaomi Mi 4c will come with a Micro-USB to USB Type-C adapter in the box, which can be attached to the bundled Micro-USB cable . In another post, Bin revealed that the Mi 4c will support 4G LTE connectivity; though it has not been specified which of the three Chinese telecom providers will offer 4G on both the SIMs (4G dual-SIM). 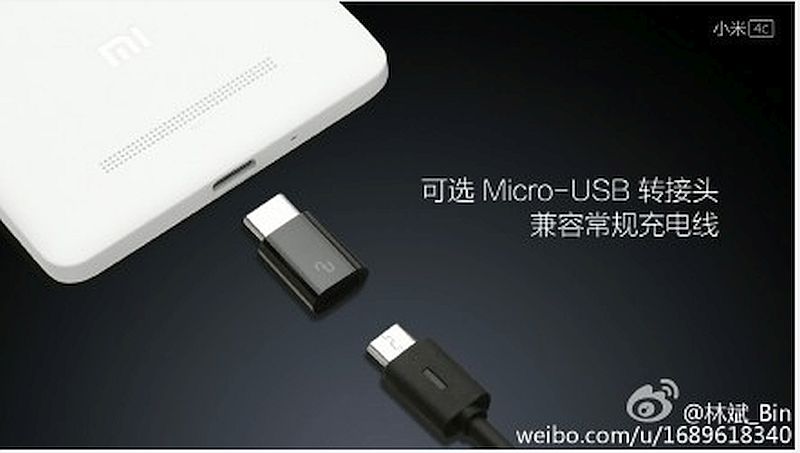 The new variant of the Mi 4, the Mi 4c, has been leaked before on several occasions. Similar to the majority of Xiaomi devices, the upcoming Mi 4c is said to be available in China first, and then be rolled out to other regions. The smartphone is expected to be released in the first week of October.

The leaks so far have tipped that the Mi 4c will be placed between the flagship Mi 4 and affordable Mi 4i smartphones. The yet-to-be-launched Xiaomi Mi 4c's retail box was leaked, tipping a Snapdragon 808 processor apart from other details. Other rumoured specifications include a 5-inch full-HD display; 2GB of RAM; 16GB storage, and a 3080mAh battery. A 13-megapixel rear camera is listed on the retail box as well alongside a 5-megapixel front camera.