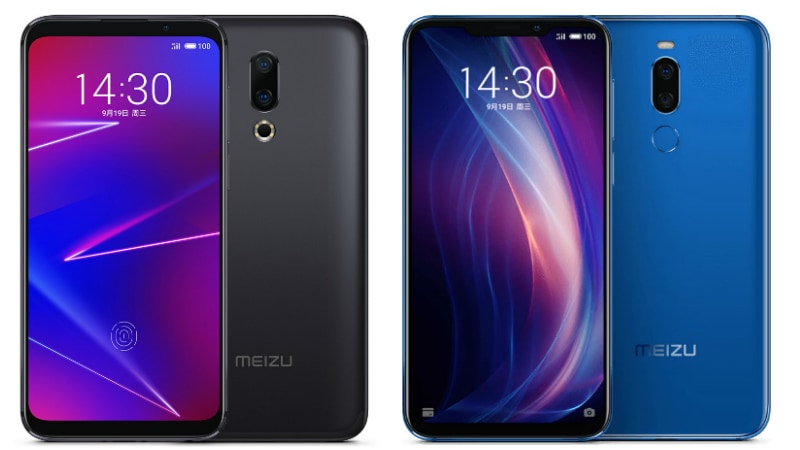 Meizu has expanded its portfolio in China by announcing two smartphones - the Meizu 16X and the Meizu X8. Both the smartphones are powered by the Snapdragon 710 SoC paired with 6GB RAM, sport dual cameras aligned vertically at the back, a 20-megapixel selfie camera, and run on Android 8.1 Oreo based on Flyme OS. While the X8 sports a rear fingerprint sensor, the 16X has an in-display fingerprint scanner. On the other hand, the Meizu 16X does not sport a display notch, but he X8 sports an iPhone X-like display notch.

The more premium Meizu 16X supports dual-SIM slots, and runs on Android 8.1 Oreo based on Flyme OS. It features a 6-inch (1080x2160 pixels) full-HD+ AMOLED display with 402ppi pixel density. The device has slight bezels on the top and bottom of the display, however lacks any physical buttons. It is powered by the Snapdragon 710 octa-core (dual 2.2GHz Kryo 360 + hexa 1.7GHz Kryo 360 CPUs) processor with Adreno 616 GPU and 6GB RAM. Internal storage options are at 64GB and 128GB.

The Meizu 16X sports a dual camera setup - with one 12-megapixel sensor with wide-angle lens, f/1.8 aperture, four-axis OIS, PDAF, and laser auto-focus, and a secondary 20-megapixel telephoto sensor with f/2.6 aperture. Both the cameras are supported by a six-LED ring LED flash. At the front, there is a 20-megapixel camera with f/2.0 aperture, and AI face unlock support. The Meizu 16X supports an in-display fingerprint sensor as mentioned above. It packs a 3,100mAh battery with mCharge fast charging. Connectivity options include Dual 4G VoLTE, Wi-Fi 802.11 ac (2.4GHz + 5GHz), Bluetooth 5, GPS + GLONASS, 3.5mm audio jack, and USB Type-C port. The Meizu 16X dimensions measure 151x73.5x7.5mm , and it weighs 154 grams.

Now, the Meizu 8X sports a 6.2-inch (1080x2220 pixels) full-HD+ display with 401ppi pixel density. It is also offered in a 4GB RAM variant, and sports a dual camera setup as well. The setup has one 12-megapixel sensor with f/1.9 aperture and dual PD focus, and a secondary 5-megapixel sensor as well. Both these lenses are backed by a dual-tone LED flash. The Meizu 8X supports a rear fingerprint sensor right below the camera setup. It packs a 3,210mAh battery with mCharge fast charging support, dimensions measure at 151.2x74.6x7.8mm , and the smartphone weighs a little more than the 16X at 160 grams. All of the other specifications of the Meizu X8 are identical to the Meizu 16X.

Over 180 Million Windows Threats Detected in Q2 2018: Quick Heal
Capcom Vancouver Studio, Behind Dead Rising Sequels, Has Been Shut Down