Marshall London Is the Smartphone That Audiophiles Will Love 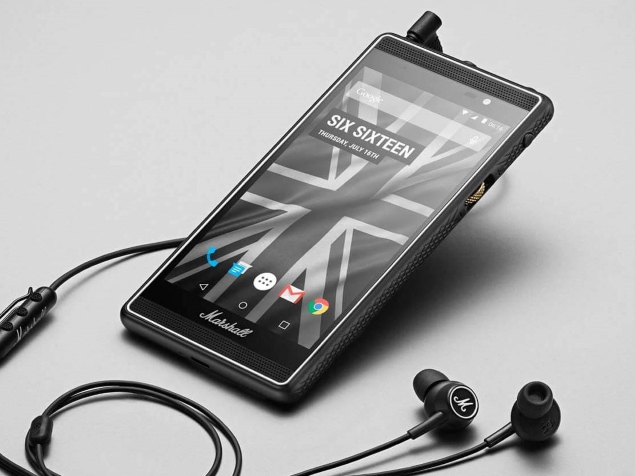 Marshall, a brand otherwise known for making some of the best guitar amplifiers in the world, has announced that it plans to release its first smartphone soon. The Android-powered Marshall London smartphone is currently open for pre-orders, and is expected to ship in August.

The smartphone has been designed with Marshall's typical aesthetic in mind, and has a distinct similarity to the British company's popular series of guitar amplifiers. The phone is targeted towards audiophiles and music-oriented users, with two front speakers for a stereo effect, two audio outputs with separate volume controls for each, and a dedicated music button to quickly launch the music application. Marshall has indicated that the phone has high quality audio processing built into it, which is powered by a dedicated Wolfson WM8281 digital-analogue converter. The company will be bundling its Marshall Mode in-ears as part of the package, and states that the phone "might just be the loudest phone on earth".

Other audio-friendly features include a scroll wheel instead of the typical two-button volume control, a powerful system-wide equaliser and a handful of bundled audio apps such as DJ-APP and LoopStack. The rest of the device is ordinary and mid-range at best, with a 4.7-inch 720p screen coupled with Corning Gorilla Glass 3, 16GB of internal storage (expandable with microSD), 2GB RAM, 8-megapixel primary camera, 2-megapixel front camera and a 2500mAh battery. The device is powered by a Qualcomm Snapdragon 410 MSM8916 SoC, and runs on Android 5.0.2 Lollipop.

Marshall has priced the London at SEK 4,995 (Rs. 37,000 approximately), which is definitely much higher than what buyers are used to paying for similarly specified handsets. However, the specialised music functionality, the looks and Marshall's rich heritage and brand name will likely entice buyers to the London. Marshall has already branched out into the personal audio segment, and manufactures a range of headphones and multimedia speakers, including the Marshall Hanwell.