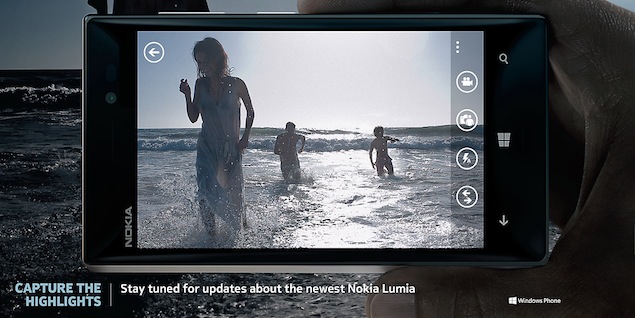 Nokia has confirmed the Lumia 928, its new flagship Windows Phone smartphone, through a teaser on its US website that also displays the image of the phone. The teaser focuses on the camera capabilities as it features the caption 'Capture the Highlights'. Interestingly, the teaser doesn't feature Verizon branding.

The teaser follows a print ad in the magazine Vanity Fair that featured the same image and mentioned that the phone will employ Nokia's PureView imaging technology for taking images in low-light conditions and Optical Image Stabilisation. The phone in the image sports US carrier, Verizon's branding.

Earlier, a billboard advertising the phone was also spotted.

Other rumoured specifications for Lumia 928 include 4.5-inch Super AMOLED display, which is allegedly being made by Samsung. The display will have a resolution of 768x1280 pixels.
Nokia Lumia 928 is expected to come with an 8.7-megapixel PureView camera just like the Lumia 920. The Lumia 928 will allegedly come with 1GB of RAM, 32GB of internal storage and 2,000mAh battery. Reports also indicate that Nokia Lumia 928 will come in White, Black, Red and Cyan colour options and will be exclusive to US carrier Verizon.
Comments