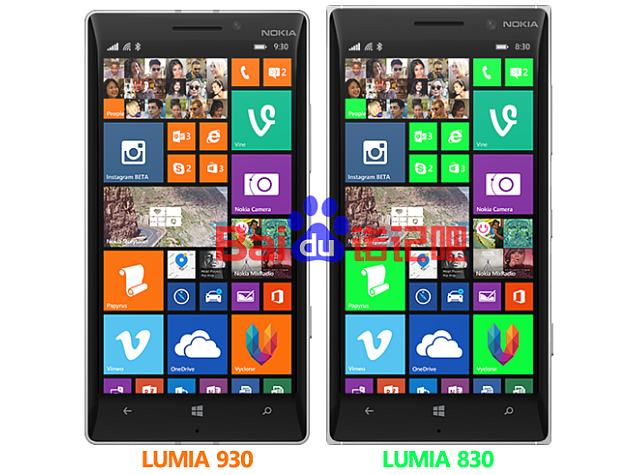 Previously spotted in July, the anticipated Lumia 830 smartphone has once again surfaced online in a bunch of images. The Windows Phone-based smartphone has been leaked while passing through the Brazilian certification process equivalent to the US FCC, and separately was also seen compared with the Lumia 930 in another image coming from China.

First spotted by WPCentral website, the Lumia 830 was seen in Brazil's Anatel certification. While the images in the listing fail to provide any real specifications of the smartphone, they show the design profile of the handset.

Listed with model name RM-985, the Lumia 830 measures 139.4x70.7x8.5mm, proving to be slightly thinner than existing Lumia siblings. The images also show the smartphone to feature

a Micro-USB slot at the top along with the 3.5mm headphone jack. The right panel is also seen feature the power button, volume rocker, and what appears to be a dedicated camera button.

In addition, the Anatel images indicate the Lumia 830 will have a removable back cover, replaceable battery and a slot for external microSD card. The device is also seen sporting a Lumia 1020-like rear camera. The website also speculates the handset's camera will be PureView-branded, just like the Lumia 1020. Also seen is the 'Microsoft Mobile' branding on the inside of the Lumia 830, once the back panel is removed. The handset is also seen to feature hardware capacitive buttons.

At around the same time, a rendered image of the Lumia 830 and Lumia 930 appeared from China via the Chinese social network, Baidu (via Nokiapoweruser). The rendered image gives us an idea of the dimension of the anticipated Lumia 830 smartphone in comparison with the Lumia 930.

Matching with the Anatel images, the Lumia 830 seems to feature the same screen size as the Lumia 930 - 5-inches. The length and height of both the handsets are almost identical. Nokiapoweruser calculates that the Lumia 830 measures 139.4x70.7mm, in comparison to the Lumia 930's 137x71mm. The website also claims the Lumia 830 will feature an IPS LCD display paired with Nokia's PureMotion technology.

Notably, Microsoft is expected to launch the selfie-focused 'Superman' Lumia 730 smartphone alongside the Lumia 830 at the company's IFA event scheduled for September 4.

A recent report citing a Lumia 730 'RM-1038' listing on the Chinese equivalent of the FCC had indicated the smartphone will come with support for 4G LTE; Nano SIM, Qi Wireless charging, and microSD card. The site also suggests the height and width of the alleged Lumia 730 will be 134.7mm and 68.5mm respectively; though there was no word about thickness.

Previous leaks had suggested the Lumia 730 will feature a 4.7-inch HD display and will come with dual-SIM support. Under the hood, the anticipated selfie-focused handset is expected to be powered by a Snapdragon 400 processor alongside Adreno 305 GPU and 1GB of RAM. It would sport a 6.7-megapixel rear camera and would feature a 5-megapixel front-facing camera, which will be the highlight of the rumoured device.