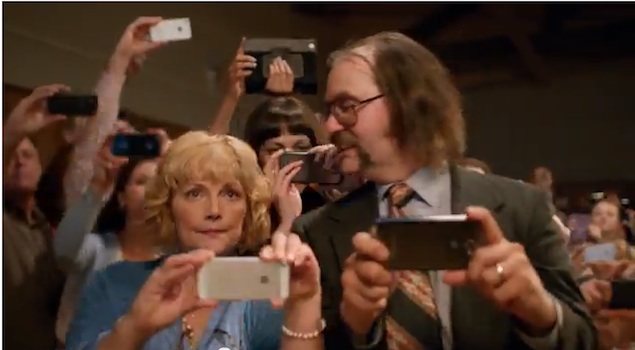 In a follow up to its previous television commercial for the Nokia Lumia 920, that mocked the rivalry between Apple and Samsung to drive home the "Switch to Lumia" message, Microsoft is now showcasing Nokia's new Lumia 1020 PureView smartphone in a different setting.

Instead of a wedding ceremony, the action now moves to a school performance with anxious parents determined to capture their children's talents with their Apple iPhones and Samsung Galaxy smartphones.

It all starts with a wife chiding her husband to take a close shot of her kid with his iPhone after finding out that it's not able to zoom in to capture the performance. As he walks towards the front, we witness the other parents, keen to capture the moment, fighting with each other to grab the best position. The parents get into tiffs, mocking each other's iPhones and Galaxy phones with banter that we've heard in their respective marketing campaigns.

A parent who is using a Samsung Galaxy phone mocks the other iPhone using one saying, "2007 called, they want its camera phone back." In response to it, the other parent gives him a headbutt saying, "How's this for a drama shot."

Chaos ensues as all the parents move forward and disrupt the performance with their antics. A single couple sitting right at the back, is however, calm and composed. The wife asks her husband why they weren't getting closer to which he responds," With the Nokia Lumia 1020, we get the best seats in the house," zooming in on a previously shot picture showing the level of detail that the phone's camera captures.

The ad ends with the usual 'Don't Fight. Switch' message.

Just like its last ad, Microsoft takes potshots at Android or rather Samsung and Apple fanboys, who get into platform wars at the slightest provocation to give a message that it has what the others don't. The ad prominently features the iPhone and Smasung Galaxy phones, while the Nokia Lumia is only seen towards the end. While it makes for a fun watch, it's difficult to say if the ad would be able to convince people enough to switch from their current mobile platform to Windows Phone.

It's noteworthy that this is not the first time that Microsoft has targeted someone through an advertising campaign.

Microsoft has also been running parody ads taking pot shots at Apple's iPad.  Recently, even Nokia released an ad for its Lumia 925 smartphone that parodies Apple's "Photos Every Day" commercial for the iPhone and compares the Lumia 925's camera with that of the iPhone by placing photos side by side in the same frame.

In November, Microsoft had launched "Scroogled" campaign through which it tried to warn consumers that they risk getting "scroogled" if they rely on Google's shopping search service.