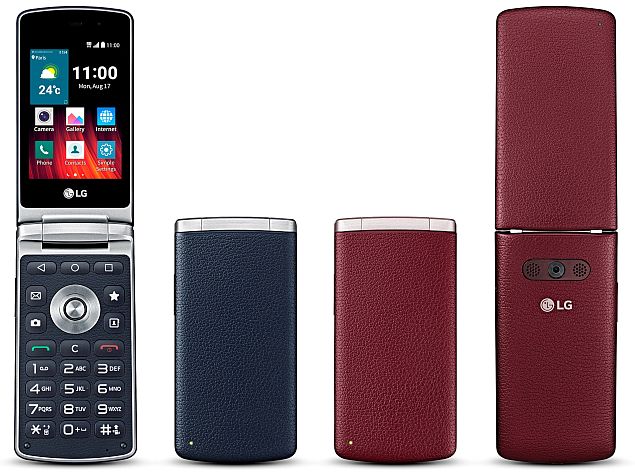 LG has launched its new flip phone, the Wine Smart, targeting global consumers that are still attracted to the folder or clamshell design of phones.

With the launch, the South Korean manufacturer is breaking away from the usual custom to launch flip phones only in its home market. The LG Wine Smart (2015) will be released later this month in select markets including France, Italy, Poland, Spain, Kazakhstan, and Japan followed by other regions. LG has said that the pricing and availability of the new flip phone will be announced locally at the time of launch.

The LG Wine Smart is the international variant of the LG Gentle flip phone that launched earlier this month in the company's local Korean market. Notably, the company had launched a flip phone with the same name last year in Korea. However, the new LG Wine Smart phone features upgraded innards.

The company says, "Thanks to the positive response to the original Wine Smart introduced in Korea last year, LG optimised the latest model with more advanced multimedia features to make the transition from feature phone to smartphone as seamless as possible."

For specifications, the new LG Wine Smart features identical specifications to the recently announced LG Gentle. Unlike some flip phones that sport dual-screens (on the inside and the outside of the top half), the LG Wine Smart smartphone features a single 3.2-inch LCD touchscreen with a resolution of 320x480 pixels. It runs Android 5.1.1 Lollipop and the flip phone is powered by a 1.1GHz quad-core processor alongside 1GB of RAM. There is 4GB of inbuilt storage on board, and the LG Wine Smart flip phone supports expandable storage (unspecified maximum storage limit) via microSD card.

The new flip phone from LG sports a 3-megapixel rear camera with LED flash, while also including a 0.3-megapixel front camera. It bears a 1700mAh removable battery. Apart from 4G LTE, the LG Wine Smart includes Wi-Fi, Bluetooth, Micro-USB, and 3G connectivity options. It measures 117.7x58.7x16.6mm; weighs 143 grams, and will be available in Navy and Burgundy colours. The LG Wine Smart smartphone features a T9 keyboard and also comes with a leather-like finish on the rear panel.

Commenting on the launch, Chris Yie, Vice President and Head of Marketing Communications for LG Mobile Communications Company, said, "Our goal with LG Wine Smart was to create a smartphone that fans of flip phones could embrace. Consumers shouldn't have to miss out on the smartphone revolution because they prefer a particular phone design over another. With LG Wine Smart, they won't have to."