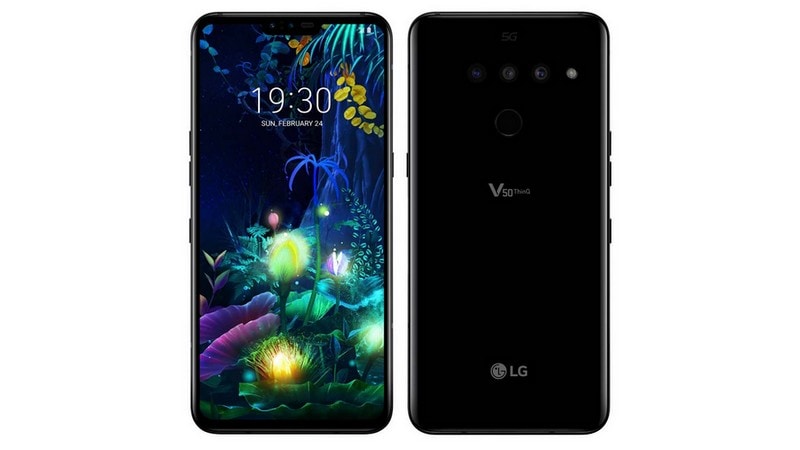 LG V50 ThinQ 5G was launched at MWC 2019 on Sunday, the company's first 5G-ready smartphone. It was launched alongside the LG G8 ThinQ and the G8s ThinQ. The LG V50 ThinQ is an all-out flagship that brings a powerful imaging hardware, top-of-the-line processor, a promise of superior audio output, and sleek design. The LG V50 ThinQ has been launched alongside a secondary display called 'Dual Screen' that also acts as a case for the new smartphone and connects via Pogo pin connectors. The phone will be released in select markets and for the same, LG is partnered with telecom operators in ten countries.

LG V50 ThinQ 5G price, release date
The LG V50 ThinQ 5G is expected to hit the market later this year, however, the company is yet to reveal its pricing. Notably, the company also launched the LG G8 ThinQ and LG G8s ThinQ at its MWC 2019 event, however, it has not detailed their pricing and availability either.

LG V50 ThinQ 5G specifications
The LG V50 ThinQ 5G is a dual SIM smartphone (Nano Nano) that boots Android 9 Pie. The new LG flagship packs a 6.4-inch QHD (1440x3120 pixels) OLED FullVision display with a 19.5:9 aspect ratio, 538ppi pixel density, and HDR10 support. To go with the new smartphone, LG has launched an accessory called the Dual Screen which looks like a flip cover and adds a secondary display for a more immersive and versatile content consumption experience. The Dual Screen for the LG V50 ThinQ 5G has a 6.2-inch full-HD (2160 x 1080 pixels) OLED display that has three Pogo pin connectors on the hollow housing adjacent to the display. It is powered by the LG V50 ThinQ 5G smartphone and doesn't come with its own battery.

The hinge allows the display to be aligned at 180-degree 104-degree depending upon the usage.

The new LG offering has a 128GB of inbuilt storage that can further be expanded via a microSD card (up to 2TB). Cellular connectivity is handled by 3G, 4G LTE-A as well as 5G, with the other wireless networking protocols comprising of Bluetooth 5.0, NFC, and Wi-Fi 802.11 a/b/g/n/ac. There is a USB Type-C port for charging the device's 4,000mAh battery that also has support for the Quick Charge3.0 fast charging standard. The LG V50 ThinQ 5G measures in at 159.10x76.10x8.30 mm and tips the scales at 183 grams.