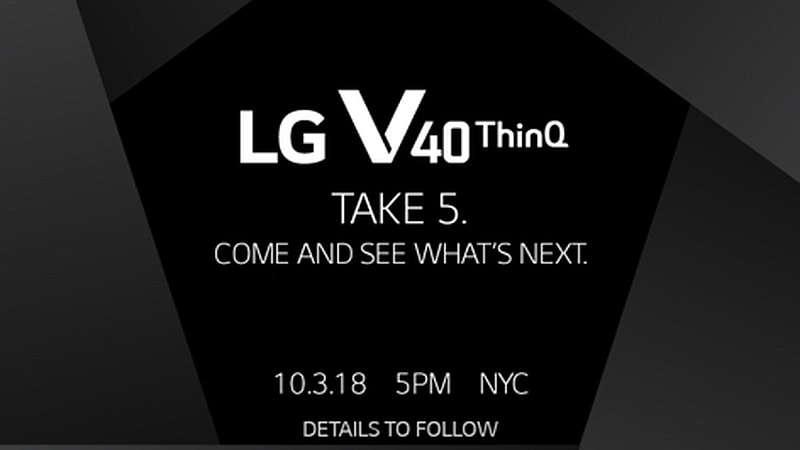 LG V40 ThinQ is all set to become the next in LG's flagship phablet series, come October 3. The South Korean giant on Thursday announced that it would be hosting the launch event for the upcoming LG V40 ThinQ in New York at 5pm EDT (2:30am IST) on October 3, and the next day at the LG Science Park in Seoul's Magok district at 10am KST (6:30am IST). The company has shared a teaser video that suggests that the V40 ThinQ might just sport a triple camera setup on the back, competing directly with the Huawei P20 Pro.

The South Korea invites have been sent out to the media, as per a confirmation by LG Electronics. The Verge shared the New York invites. The text mentioned in the South Korean invite's teaser also reveals that there might be three sensors in the phone's rear camera setup - a standard sensor, a super wide angle sensor, and a telephoto option. This development is in line with previous rumours which have suggested that the LG V40 ThinQ might pack in a total of five cameras, with three on the back and two up front. A report had claimed that the triple camera setup would include 20-megapixel, 16-megapixel, and 13-megapixel sensors. There is still no confirmation on the number of sensors for the selfie camera setup.

Apart from that, previous reports claim that the upcoming LG V40 ThinQ could resemble a larger G7 ThinQ with a similar display notch up top. LG is also expected to retain the Qualcomm Snapdragon 845 SoC to power its next-gen flagship phablet, along with 6GB or 8GB of RAM. Additionally, a dedicated Google Assistant hardware button and LG's Quad DAC audio technology are expected to be borrowed from the G7 ThinQ flagship. While a notch is expected, the LG V40 ThinQ is expected to get a 90 percent screen-to-body ratio, which translates into super thin bezels. We shall have to wait a few more weeks to get detailed specifications, prices, and availability information for the LG V40 ThinQ.