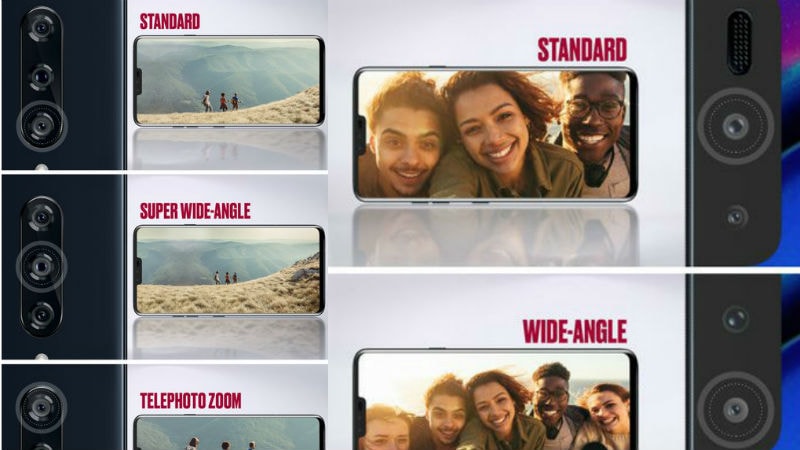 LG V40 ThinQ, set to launch later this week, will come with five cameras - something the South Korean company has already announced. The smartphone is scheduled for launch on October 3 in New York and October 4 in Seoul. The smartphone will be equipped with a triple rear camera setup and two cameras at the front. Meanwhile, ahead of the official launch, a last-minute leak has detailed the functioning of the five cameras in the alleged LG V40 ThinQ. The leak has essentially hinted at how the five cameras in the upcoming smartphone could work.

Popular tipster Evan Blass (aka @evleaks) has shared details of the five cameras in LG V40 ThinQ via Twitter. According to the leak, the LG V40 ThinQ will come with three cameras on its back, with a standard angle lens, a super wide-angle lens, and a telephoto zoom lens. Meanwhile, on the front, the smartphone will have a dual camera setup with a standard lens and a wide-angle lens.

Notably, the latest leak does not give out more details of the five cameras. However, a report in July had claimed that the triple camera setup would include 20-megapixel, 16-megapixel, and 13-megapixel sensors, while matching Blass' details on the types of lenses. Meanwhile, the two selfie camera sensors are expected to enable 3D face recognition on the handset. The two selfie cameras will also reportedly be able to capture bokeh shots.

Coming to the other specifications of the smartphone, LG had previously announced that the V40 ThinQ will sport a large 6.4-inch display with an unknown resolution and aspect ratio. Based on previous reports, the display of the smartphone is expected to borrow the notch from the LG G7 ThinQ. It may also boast of a 90 percent screen-to-body ratio. Apart from that, the LG V40 ThinQ is expected to be powered by the Snapdragon 845 SoC, paired with 6GB/ 8GB of RAM options. It may also come with a dedicated Google Assistant hardware button and LG's proprietary Quad DAC audio technology.